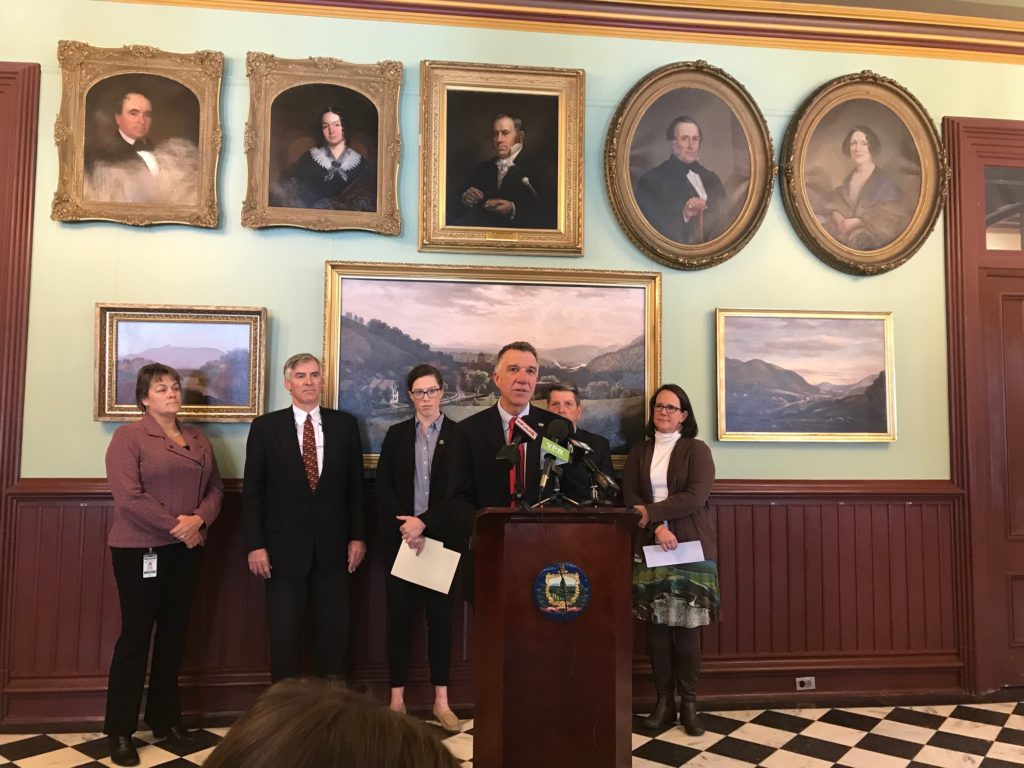 A COLLABORATIVE EFFORT: Gov. Phil Scott announces the conclusion of a competition that resulted in $1.2 million being distributed to five companies who put the best plans forward to mitigate phosphorus runoff in Vermont.

MONTPELIER — Gov. Phil Scott announced that the state has paid out about $1 million in rewards to five groups that led in innovation to reduce phosphorus content in waste streams.

These efforts are part of stage three of the Vermont Phosphorus Innovation Challenge (VPIC).

“These innovative projects not only enhance our efforts to restore Vermont’s waterways but also promote economic growth and environmental sustainability,” Scott said at a press conference Thursday. “Congratulations to the groups who are moving on in the competition and I look forward to seeing your creative solutions develop in the coming months.”

The program began in February 2018 as an effort to kickstart phosphorus reduction, which in proper amounts is essential to life on Earth, but there’s too much in Vermont.

“Phosphorus is a nutrient that is essential to both plant growth and human and animal health and this includes the health of our lakes and ponds, without any phosphorus they would be watery deserts devoid of life,” Julie Moore, secretary of the Agency of Natural Resources, said. “Unfortunately, as the governor noted, currently there is simply too much phosphorus in Vermont.”

In an ideal system there’s an equal amount of the nutrient being produced and consumed within nature, Moore said. Disturbing that balance is each year Vermont imports about 1,500 addition tons via fertilizer, animal feed and more.

The state does export some of it back out in products like dairy, but it’s not enough to return the balance. Some examples of products that can be made from phosphorus include potting soil, compost and organic fertilizer.

With too much phosphorus, Vermont watersheds get dangerous algae blooms that make people sick and have been known to kill dogs. The state’s Department of Environmental Conservation explains more on their webpage:

“Some species of cyanobacteria [algea blooms] produce toxins and these toxins have been documented in some Vermont lakes. Cyanobacteria are not always toxic and it is not possible to tell by looking if toxins are present. For this reason, the Vermont Department of Health and the Vermont DEC recommend that everyone avoid contact with cyanobacteria.”

The concept of the contest is to get the phosphorus out of the environment before it gets into any water body. It started with 27 organizations. The goal was to put their best technology forward to cost-effectively remove phosphorus. The groups were also judged on their business model concerning what products to make and sell using phosphorus. Judges included scientists, scholars, specialists, and marketing and business leaders.

Brett Long, the deputy commissioner at Vermont Department of Economic Development, commented on why the contest is important.

“This challenge is allowing us to explore the technologies that businesses propose to help address the collection and reuse of phosphorus,” he said. “Through VPIC, we are investing now to see how effective technologies can be in collecting phosphorus commercially.”

Long added there’s potential for Vermonters to save tax money: “If these businesses can collect phosphorus and reuse it in their own products, the phosphorus they collect will be phosphorus that the state and consequently the taxpayers will not have to pay to collect through other means.”

The overall winner was the partner-effort of the University of Vermont and DVO Inc., from Chilton, Wisconson, which received $500,000. Their method is to use anaerobic digesters at dairy farms to remove the phosphorus. A newly formed Vermont company called NEWCO will work on the distribution of phosphorus-made products.

Other winners included Agrilab Technologies, of Enosburg Falls, which received $320,000 for developing a mobile manure composting container that generates its own heat for the drying process. Digested Organics of Ann Arbor, Michigan, received $137,500 for working on a mobile filtration system which separates low-phosphorus manure from the concentrated material.

Green State Biochar, of Barton, received $135,000 for using a large kiln to turn wood waste into biochar, which is then used to capture phosphorus. Village of Essex Junction, Chittenden County Solid Waste District, and UVM will share $58,907 for using an electric field filter that takes phosphorus from the waste streams of treatment plants.

Last year six other companies shared $250,000 during the second phase of VPIC. In total, the contest awarded more than $1.4 million.