ST. JOHNSBURY — Speaking at his weekly press conference Tuesday, Gov. Phil Scott focused on infrastructure and economic development while standing in front of the remodeling project of the Fairbanks Museum.

Vermont is allocating $40 million for the state’s Community Recovery and Revitalization Program to help downtowns stay economically healthy and to attain “economic equity,” the governor said. Applications for funds will look first at projects that “primarily serve BIPOC” interests. 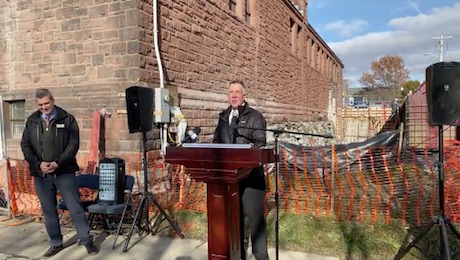 “Awards will be made on a rolling, first-come-first-serve basis, except for the first 30 days, during which ACCD (Agency of Commerce and Community Development) will prioritize the review of applications that primarily serve BIPOC communities,” according to a press release from the governor’s office.

At the appearance in St. Johnsbury, Scott said the economic development effort will go to “projects that across the state will help revitalize our rural economies.”

“Bringing more economic equity from region to region has been a priority for me and my team and the legislators here today,” Scott said. “… There’s a big economic gap between here and the northwestern part of our state.”

The funding is intended for capital improvements and can be distributed by nonprofits, for-profits, and municipal entities.

Money also will be directed toward industries most affected by the shutdowns during COVID-19. These include arts, entertainment, childcare, and educational services, for example. At the municipal level, money will target wastewater improvements especially, if it supports new or current housing.

Joan Goldstein, commissioner of the Vermont Department of Economic Development, said, “We are thrilled that municipalities can now apply for these grants and pitch them to their businesses and nonprofits. … There are quite a lot of municipalities lined up for water or wastewater projects.”

She said much of these funds are from DARPA and the American Rescue Plan Act. Up to $1 million can be allotted to each project, or up to 20% of the project’s cost. This will allow for at least 40 projects to receive aid.

Some critics posting on the governor’s Facebook page expressed frustration over Scott’s priorities.

“Speak about the “elephant” in the room, Gov! FIRST Priority: Secure Heating fuel, electricity For All this Winter season! Drop the tactics of Deflection away from the Crisis Upon Us Vermonters!” commented Diantha Gravelle.

Bill DeCosmo wrote, “Why not do something for the elderly people of the state?”

The U.S. House of Representatives on Wednesday approved new contracts with railroad workers including a 24% pay increase over five years, from 2020 to 2024, and an extra paid day off. Rail workers are also demanding seven days of paid sick leave.

“A rail shutdown would severely disrupt the flow of essential resources throughout America, including heating fuels, salt for winter ice control, and many other supplies critical to the health and safety of Vermonters and all Americans.”

The governor said he supports the federal government intervening to force an agreement.

“I fully support President Biden’s request that Congress put in place the Tentative Agreement, which was agreed to earlier this year by workers and operators. Americans cannot withstand further supply disruptions, or cost increases, and I strongly encourage Congress to move quickly and send a bill to the President’s desk.”