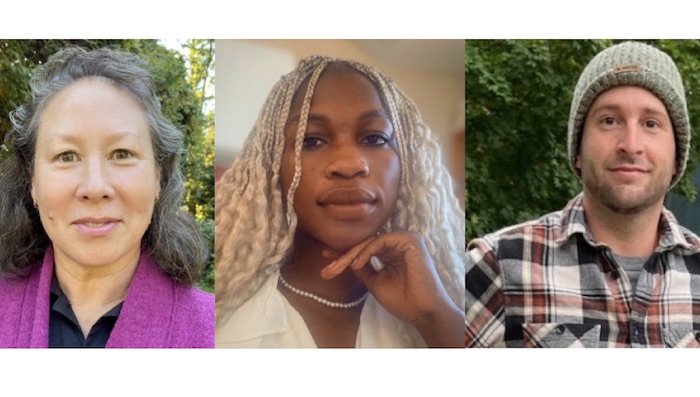 The three candidates running for Burlington City Council in the upcoming special election met to debate issues on Tuesday, and each made the case for having the right viewpoints to represent the city’s East District.

The winner of Tuesday’s special election will represent Wards 1 and 8 of the city — also known as the East District. The seat was vacated in September when former councilor Jack Hanson, a Progressive, resigned to take a new job.

John, who works for the Chittenden County Superior court, spoke first about why she is running.

“Public safety and affordable housing has been the biggest concerns,” she said. “And I think to have someone like me who’s been directly involved in public safety … is critical but also to look at new solutions. I’m looking at zoning laws, and I really want to come up with new ways to address existing issues.”

John said she would like to work in the Community Development and Neighborhood Revitalization Committee.

On matters of public safety, she said, “The killing of George Floyd has shaken America so much, as well as the Trump presidency.” John added that all public safety policy should be looked at “through a racial equity inclusion lens.”

She also said racism has been institutionalized in society.

“It’s starts with racism, systemic and institutional. It starts with the war on drugs. It deals with inequalities, all of these are a foundation of our country,” she said. “And we’re at a point right now where it feels like we are at a breaking point.”

Brandt, a resident of 32 years, was a 20-year faculty member at St. Michael’s College and is a business owner.

“I have children in the public school system, I pay property taxes, I feel very strongly about my community and my neighbors, and I ask for your vote,” she said. ” … I’m in a good position to know the challenges that are facing the residents of Burlington.”

Like John, Brandt said she also would want to serve on the Community Development and Neighborhood Revitalization Committee.

In answering a question about public safety policies, she suggested that those caught doing serious crimes such as breaking into homes need social services. She shared a story about a friend who was robbed at home.

“There needed to be enforcement of the law that no one should break into her home, but the person who broke into her home needs help,” she said. “There must have been some level of desperation, and maybe that person needs social services — help for addiction, counseling.”

Schumann, a a resident for 13 years, said his experience includes management at non-profit organizations as well as working in the social sectors to help people find housing. He’s also worked as an EMT.

“Running in this race was just the most recent effort that I found that I could serve my community,” he said. “I think that a lot of people that have suffered hardships in this town have gone unrepresented, and I sought to serve this community by representing those folks.”

He asked voters to choose one of his opponents before him as the city is engaging in a new election process known as ranked-choice voting. In this system, the voters rank candidates in order of preference, and so second and third place votes still count towards those candidates getting into office.

“I would ask that you should rank Dina number one because I think that she represents what I represent, and together we’ve built community,” Schumann said.

He said he would like to serve on the city’s finance committee, noting that he has worked on budgets over $1.5 million for nonprofit organizations.

“During that process I learned how to balance your priorities with the realities of a budget,” he said.

On the issue of policing, Brandt said she advocates making Acting Burlington Police Chief Jon Murad the city’s permanent chief. John said she worries about police abuse of power, and said “Chief Murad has been someone that has caused great controversy in his position.” Schumann said that community control of police through an oversight board would be “extremely meaningful” to help build trust between police and city residents.

While all candidates said they see affordable housing as a key issue, Brandt said her experience as a landlord and homeowner, and formerly a tenant, makes her the best candidate to address housing policy.

The winner of Tuesday’s special election will hold the seat until it expires on March 31, 2023.

The entire candidate forum can be viewed online here.