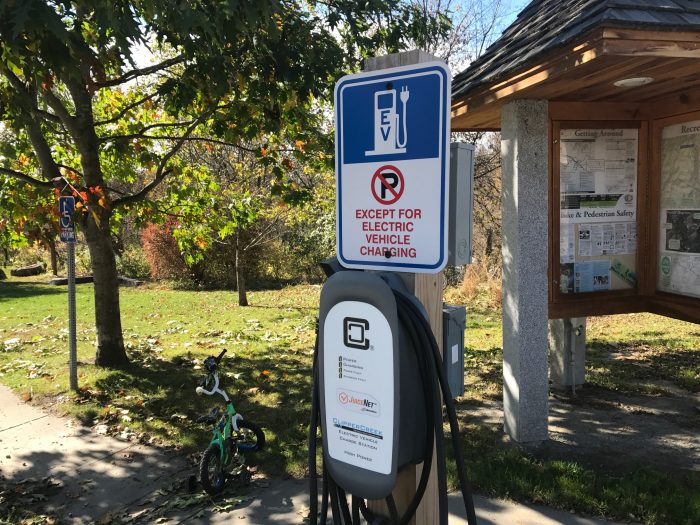 NOT ENOUGH USAGE: A charging station in Plainfield stays mostly unused as lawmakers and the governor are pushing incentives to promote EV adoption at a faster rate.

The governor and state senators are working to ensure that low- and middle-income Vermonters transition to electric cars and buses, and they hope to pay for the transportation overhaul with federal coronavirus relief dollars.

On Thursday, Gov. Phil Scott announced that the Agency of Transportation is getting more than $26 million in federal money via the Coronavirus Response and Relief Supplemental Appropriations Act. Scott wants that money put toward “energy-efficient” transportation.

On Wednesday, the Senate Natural Resources and Energy Committee took testimony from representatives of the Vermont Energy Action Network regarding why the state should invest more in EV adoption.

“We also think that by bringing in the concept of electrification, then you can improve health by reducing exposure to diesel fumes, and we can also reduce emissions overall,” said Jennifer Wallace-Brodeur, director of clean transportation at the Vermont Energy Investment Corporation.

EVs are advertised as being green and fuel-free. However, electric autos must plug into the electric grid for energy, which is powered by mostly fossil fuel sources. Also, while motorists who own electric vehicles no longer have to purchase gasoline, the cost of the vehicles is much higher than gasoline-powered counterparts. Currently, a 2021 Nissan Leaf lists for over $40,000, and the  buyer can apply for up to $7,500 in federal tax rebates. EVs also offer inferior performance — cold weather reduces an EV’s range by an average of 18.5 percent.

” … We should acknowledge that public transportation is a carbon-reduction strategy in and of itself; the more people that take transit, the fewer people who are in a car by themselves, and that’s a really important way that we can reduce emissions.”

So far, the cost of this transportation overhaul is unknown. Sen. Chris Bray, D-Addison, chair of the Senate Energy Committee, said he believes it will be in the range of $600 million.

Sen. Mark MacDonald, D-Orange, was not impressed by the proposals to pay for the initiative.

“They are all someone else’s money,” he said.

MacDonald suggested that if the money is going to be too much, it would be better to be up-front about it now than later.

“We’re not bold people and if you have bold ideas, include the money and then let us inevitably disappoint you,” he said.

Wallace-Brodeur said another idea that’s being talked about is combining the state’s public transit efforts with its school bus efforts — for example, having the school buses be allowed for public use, or vice-versa, let public busses be used for school children.

“What we’re really looking at as a team is whether we can expand rural transportation opportunities by offering combined bus services for schools and community members using electric buses,” she said. “So we are trying to really think about all the ways in which we can provide greater efficiencies to Vermonters.”

Wallace-Brodeur is also the chair of the steering committee for “The Future of Rural Transit,” an Energy Action Network project.

Linda McGinnis, a Senior Fellow at the Energy Action Network, spoke on how federal funding will play a big role in the electrification of vehicles if it joins regional multi-state efforts such as the Transportation Climate Initiative.

“With that, this state would receive predictable regular funding coming in to be able to support something like this,” she said. ” … We need to set up a system so that when other resources become available be they from a federal stimulus package or infrastructure package or through TCI, we have a system to be able to ramp up and have learned some of the difficulties of implementation in the beginning and being able to move quickly on that front.”

McGinnis also said programs that promote the purchase of EVs are numerous.

“So as I mentioned, these stackable incentives: there’s the federal incentive, the state incentive that has different rates for low and moderate-income Vermonters, utility incentives, Mileage Smart [has incentives] and then Replace Your Ride (a subsidized vehicle exchange program) on top of that. So we can have folks who see significant savings.”