Labor unions no longer get a free ride on the backs of government employees who are forced to pay for political activism they disagree with, the man who successfully challenged the practice at the Supreme Court told The Daily Signal in an interview.

For decades, Illinois state government worker Mark Janus said, union leaders had argued that nonunion employees should pay “fair share” fees so that those workers wouldn’t be “free riders” who enjoyed the benefits of collective bargaining on their behalf without cost.

In 1977, the Supreme Court accepted that argument in its unanimous ruling in a case known as Abood v. Detroit Board of Education.

But on Wednesday, in a 5-4 ruling, the high court reversed that decision in Janus v. AFSCME Council 31, finding that its Abood opinion was “poorly reasoned” and that mandatory union fees violate the First Amendment rights of government employees. 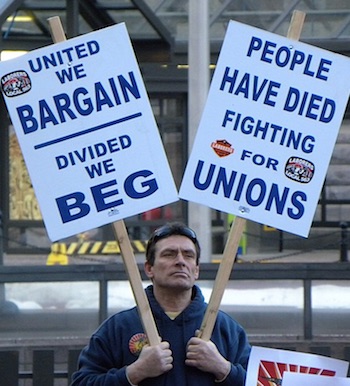 A union member at a rally sponsored by several groups including MoveOn.org and AFSCME. On Wednesday, the U.S. Supreme Court ruled that, among government workers, only members of unions can be forced to pay union fees. As a result, fees no longer may be confiscated from non-members.

Janus, a child support specialist at the Illinois Department of Healthcare and Family Services who became the lead plaintiff in the case, turned the tables on the unions’ “free rider” argument in a phone interview with The Daily Signal a few hours after the high court released its decision.

“There are two arguments on this point of free riders that need to be made,” Janus said. “Number one, it was the unions that asked for and received the ability to collectively bargain for everyone, both union and nonunion members.”

The Janus ruling affects about 5 million government employees in 22 states who no longer will be required either to join a union or pay related fees as a condition of employment.

Writing for the majority, Justice Samuel Alito said that “factual and legal” developments since the time of the Abood decision had “eroded” its “underpinnings” and left it as “an outlier among the court’s First Amendment cases.”

Alito wrote in the opinion:

Abood relied on an assumption that ‘the principle of exclusive representation in the public sector is dependent on a union or agency shop,’ but experience has shown otherwise. It was also decided when public-sector unionism was a relatively new phenomenon. Today, however, public-sector union membership has surpassed that in the private sector, and that ascendency corresponds with a parallel increase in public spending.

Alito also made the point that, over the years, it has become harder to distinguish between what union activity was political and therefore not chargeable to nonmembers and what was chargeable under the collective bargaining process.

Abood’s “line between chargeable and nonchargeable expenditures has proved to be impossible to draw with precision, as even respondents recognize,” Alito wrote, adding:

What is more, a nonmember objecting to union chargeability determinations will have much trouble determining the accuracy of the union’s reported expenditures, which are often expressed in extremely broad and vague terms.

A big part of what brought Janus into the case was how much the local chapter of the American Federation of State, County and Municipal Employees was asking in the collective bargaining process, he told The Daily Signal.

“The fact that Illinois is in such terrible financial shape and the union continues to advocate for higher salaries, bigger pensions, and more health care that the state can’t afford motivated me to get involved,” Janus said. “And because the state couldn’t afford this, the union advocated for a higher state income tax. My question is, if they don’t want to hurt the middle class why did they lobby to get this tax increase?”

What It Means to Unions

Since government workers no longer can be forced either to join a union or pay union fees under the ruling, the onus is on union leaders to be more responsive to the concerns of rank-and-file government workers if they want new members, Janus suggested.

Public-sector unions could lose more than 700,000 members across the country if Janus prevailed, according to a study released in May by the Illinois Economic Policy Institute, a nonprofit organization that says it aims “to empower individuals, policymakers, and lawmakers to make informed choices on questions of public policy.”

Mike Thulen, president of AFSCME Local 370  in Lakewood, New Jersey, told The Daily Signal in a phone interview a few days before the court’s decision that 25 percent of public employees in New Jersey could decide to opt out of their union in response to a favorable ruling for Janus.

Thulen said he based that estimate on conversations with his own members and presidents of other local AFSCME affiliates.

Thulen, a building inspector in Lakewood’s Inspection and Construction Department, said he opposed much of the union’s politics but decided to join and become active since the difference between paying full union dues and nonmember union fees was only a few dollars.

“If a significant amount of local workers do not want to be represented by the union, they can actually yank the union out of town all together,” he said. “With a favorable ruling for Janus, unions would not have as much political clout. But as an individual, you can have your own political clout and associate with whoever you want to.”

Illinois Gov. Bruce Rauner, a Republican who faces a re-election challenge from Democrat J.B. Pritzker in November, has his own history with the court case against AFSCME Council 31.

A few weeks after he was sworn into office  in January 2015, Rauner issued an executive order prohibiting collection of union fees from state government employees who aren’t members.

The governor also filed a federal lawsuit challenging collection of the fees as a violation of free speech. Janus stepped up to become the lead plaintiff in the case when a federal judge ruled that Rauner had no standing since he didn’t pay union dues or fees.

“This decision is a huge victory for freedom of speech, the freedom of affiliation, and the freedom of political activity,” Rauner said in a phone interview with The Daily Signal. “America is built on the right of being free to choose when and how to speak, and the ruling in Janus restores the freedom that was incorrectly denied for more than 40 years.”

The Supreme Court’s Abood ruling in 1977 was “fundamentally flawed” because it didn’t account for the vast differences between government unions and private-sector trade unions, Rauner said.

In deciding Janus, the justices “correctly viewed all the activity of government unions, including collective bargaining, as political,” the Illinois governor said:

It’s not just their campaign contributions. Everything they do impacts government policy and government spending, therefore this is political speech and political activity on the part of the union. Forcing someone to fund this activity against their will is unconstitutional, and the court gave us the right ruling and the right answer.

‘Opt In’ as Critical to Free Speech

Rebecca Friedrichs, an elementary school teacher who worked for 28 years in the Savanna School District in Anaheim, California, was the lead plaintiff in a case before the Supreme Court in 2016 that raised the same First Amendment argument against mandatory union fees.

In her case, Friedrichs asked the court to strike down “opt-out schemes” that government employees must navigate to avoid subsidizing a union’s political activities.

She submitted a friend-of-the-court brief in the Janus case arguing in favor of a system allowing workers to opt in rather than opt out of paying union fees. Alito’s opinion delivered on this arrangement when the justice wrote that employees must “affirmatively consent” before a union may withhold fees from their paychecks.

“We filed a brief asking the court for opt-in rights because the unions bully us when we try to opt out,” Friedrichs said in a phone interview with The Daily Signal. “Thank God the justices heard our plea and granted opt-in. It’s my hope that opt-in rights will make unions more accountable and protect teachers from more union abuse.”

“State and national teachers unions have controlled teachers in a culture of fear and used our dues for their social and political agenda for decades, bringing untold damage to America’s schools and kids,” she said. “Finally, teachers are free to pay them nothing.”

Not everyone is pleased with the ruling, of course.

Michael Keegan, president of People for the American Way, a progressive advocacy organization, criticized the Supreme Court majority for overturning a long-standing precedent.

“This decision is a political attack on working people and on labor unions dressed up in legal language,” Keegan said in a press statement. “It will take years to repair the damage being done by the narrow right-wing majority sitting on the Supreme Court. And the only way we can do that is through the ballot box.”

From the very start Janus was a calculated, political attack orchestrated by right-wing corporate interests to aid the destruction of unions, one of the few institutions in America working people have to take on the powerful corporations who dominate their lives. Rather than standing up for the interests of working people, in a nakedly partisan ruling determined by a U.S. Supreme Court seat stolen by Mitch McConnell and his Senate cronies, a bare conservative majority gave their wealthy and powerful patrons exactly what they wanted.

But Rauner, the Illinois governor, said he sees a conflict of interest in which government unions and the politicians they help elect end up putting taxpayers at a disadvantage. He said he intends to push for additional reforms.

“Mark Janus is a hero, and he deserves our deepest gratitude for what he has done for people all across the country,” Rauner said. “I thank him for his courage, for the strength of his convictions.”