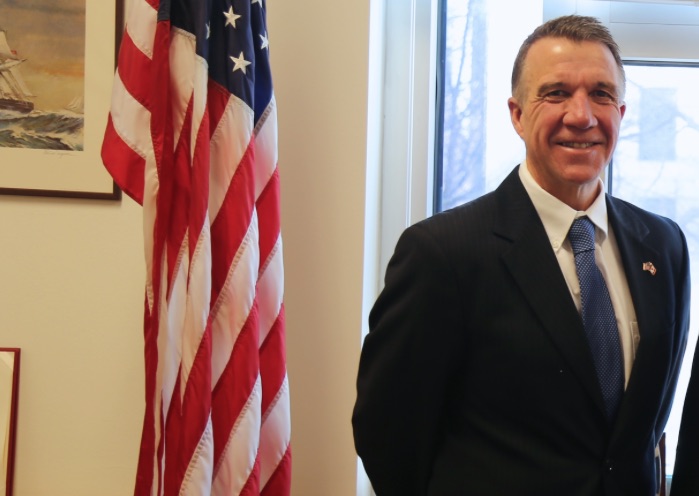 THE WINNER: Republican Gov. Phil Scott easily won re-election Tuesday night despite the economic turmoil resulting from his shutdown of the economy over the coronavirus.

In a speech recorded from a garage, Scott hinted that his shutdowns, mask and social distancing orders will continue for the foreseeable future.

“As I’ve said many times, we cannot let our guard down,” he said. “As we enter the winter months we must remain vigilant.”

He also said that “hate, fear and division,” are dividing the nation.

Elsewhere in the state, Democrat Molly Gray defeated Republican Scott Milne for lieutenant governor by winning 49.5% of the vote. Milne came in second with 42.4%. That means Gray will now take Zuckerman’s place as the head of the state Senate.

Milne sent out a comment before the end of the evening: “I am honored by the tens of thousands of Vermonters who supported my candidacy. I send my sincere congratulations to Molly Gray on her victory this evening. I wish her success moving forward.”

Some big headlines from the House races include incumbent Rep. Cynthia Browning, D-Arlington, lost her Bennington-4 seat while running as an independent. The top vote getters in the district were Seth Bongartz and Kathleen James — both Democrats. Browning has been a fiscal conservative on some issues and had been known to break ranks from her party on numerous votes.

Some new Progressive/Democrats to win House seats were Taylor Small, who will represent the Chittenden 6-7 district, and Tanya Vyhovsky, who won the second seat in the Chittenden 8-1 district.

Scott won Vermont for the third time despite overseeing the state’s worst economic downturn in decades due to his mandated shutdowns related to combating the coronavirus. As of this month, 58 Vermonters have died in part due to the virus.

A handful of commentators noted the “spit-the-ticket” trend in Vermont, with just about a third of Vermonters voting for President Trump but more than two-thirds voting for Scott.

A poll by Lake Research Partners in September showed that Vermonter voters, in general, are still overall favorable to Democrats by 58% to 43%.