Gov. Phil Scott in his address last week said Vermont won’t have to fall back on COVID-19 mandates issued in 2020 as the state moves forward by working to prevent the spread of the virus.

Scott said he joined other governors on a virtual call with President Joe Biden on Dec. 27, where “the president reiterated he is committed to working with states to ensure we keep moving forward” in the battle against COVID-19. 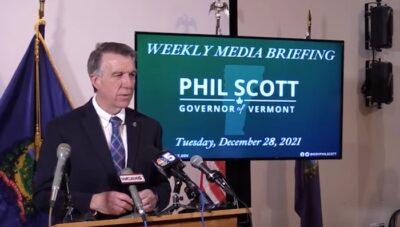 “Even with omicron we have the tools we need,” Scott said. “We have vaccines, boosters, testing, and common-sense precautions we have talked about repeatedly — like wearing masks indoors and crowded public spaces and staying home when sick.”

Scott said a topic of conversation during the call was “an effort to acquire half a billion at-home tests for Americans” and he “looks forward to hearing more about that plan very soon.”

The governor discussed the distribution of “tens of thousands” of tests that were administered before the Christmas holiday and the state “plans to do so again this week” as COVID-19 numbers are rising across the nation.

Scott said he heard of “frustrations that resulted from people not getting them as they ran out,” and that the state is “doing the best we can with what we have until the federal supply chain starts flowing.”

He said the state just received a shipment of tests with the majority being distributed to schools and long-term care facilities.

“We are getting any excess rapid tests out of the door as fast as we can,” the governor said. “We hope that supply will increase and with it accessibility. We have been working with federal partners for weeks, and we hope to get final details soon.”

Scott said he is working with the Department of Education on a plan that will get rapid tests to parents for kids to be tested before they return to school following the holiday break.

“We just got a supply that makes this possible,” Scott said. “We will have more for you in the next day or so.”

Scott said the goal is to have 80,000 test kits available to parents “over the next week.”

Commissioner Michael S. Pieciek said that the national COVID-19 positivity rates and number of cases across the nation are rising and “infections continue to rise as omicron rises.”

Pieciek said that the state is monitoring spread and hospitalizations closely, as “numbers are increasing across New England.” However, he said, cases have been relatively stable in Vermont.

“We are up 4% in Vermont, and the positivity rate is over 5%, representing a 25% increase over the past seven days, similar to Thanksgiving,” he said.

Pieciek said that while Vermont doesn’t appear to see a case surge fueled by omicron, “we know it is a matter of time before we see more significant spread here.”

In Vermont, Pieciek said, hospitalizations have decreased by 3% over the past week, and that “most hospitalized are unvaccinated.”

Secretary Daniel M. French said plans are in the works to operate schools following the break and to ensure they remain open.

“We had three strategies to keep schools open during the pandemic,” French said, “and we will use the same for omicron.”

French said vaccination, contract tracing and testing, along with mitigation recommendations will continue for school operations.”

Following the holiday break, French said, schools will expand the use of antigen tests.

He said with the distribution of at-home test “parents, not schools” will be “responsible for administering home tests.”

“Schools will be a distribution point,” he said.

French said the plan is to continue PCR testing in schools, but RT-Lamp testing will be utilized as results will be provided “more quickly” and “specimens do not have to be shipped to labs.”

On the topic of masking in schools, French said the state initially has a plan to push back the use of masks when the student population is 80% vaccinated, but that date will be pushed back to Feb. 28 before it goes into effect.