In an appearance on “The Morning Drive” radio program Wednesday, Gov. Phil Scott addressed a series of topics ranging from rising crime and homelessness to the results of last week’s primary election.

On the issue of rising crime, especially in the City of Burlington, the governor reminded listeners that City Council voted to reduce the city’s police force by about a third as part of the “defund the police”movement.

“They defunded the police, they did that — the council did that. They determined that was their approach,” Scott said. 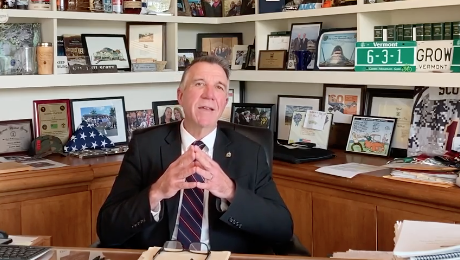 He contrasted that with the state’s policy, which has not cut funding of the Vermont State Police, yet also is having to manage staffing challenges.

One of the show’s callers expressed concern that more needs to be done — not just having more officers in the field, but also more action in courts to discipline offenders and keep dangerous criminals off the street. Scott shared that caller’s views.

“It’s not just about having boots on the ground, so to speak; we need to be able to prosecute these cases to the prosecution’s capacity and help the courts address their backlog of cases as well. Again, that’s another area of concern,” the governor said.

Another caller expressed frustration that Burlington crime is so bad that the city now requires support from the Vermont State Police. In reply, Scott pointed to a new 10-point plan designed to address these challenges.

“We have to deal with this, this can’t be the new normal,” Scott said. “And as the caller had said, we are impacted as well. The VSP is impacted, we are down on the number of troopers by quite a few.

“We aren’t going to be able to assist in every call, but remember, we are 24/7 365 and we will answer the call when it comes in. And if there’s a community in trouble as we saw in Burlington, and they were pleading for help, we will assist.”

Scott reminded another concerned caller about bills that he’s been vetoing which, he says, would have made the current crime situation even worse.

“There was one that would have erased criminal records including for drug trafficking,” the governor said. “I think at this point in time that was the wrong direction to move in. And another one … they wanted us to determine the legal amounts of all drugs like for recreation including things like heroin. And again, I just think that that’s the wrong direction at this point in time.”

He also urged listeners to be supportive of each officer who has a tough task each day.

“We also need to reflect on that they are helping us, they are part of our public safety net, and they are critical,” he said.

Later in the program the discussion turned to the recent primary election, which had a few surprising results. Scott was asked about Liam Madden, the self-identified independent who won the Republican nomination for Vermont’s open U.S. House seat. Madden beat two conservative GOP candidates who largely split their voter base, allowing Madden to win the most votes in the three-way race.

The governor was critical of Madden.

“He actively pursued the Republican nomination … and I think when you do that you have to question his motives in terms of trying to do away with the two-party system,” Scott said. “I’m a firm believer in the two-party system; I think we need that as part of how we work as a democracy. And so I think it’s a bit counterintuitive in some respects to run on a ticket when your mission is actually to decimate that system that he was a part of.”

When the discussion turned to homelessness, Scott was also asked about a report by State Auditor Doug Hoffer, which had some concerning statistics regarding trends in homelessness across Vermont.

“We have to make sure that when we are putting money into housing, that we don’t forget about transitioning people out of homelessness,” Scott said. “Remember during the pandemic we shut down a lot of those homeless congregate living shelters.”

16 thoughts on “Gov. Scott: ‘They defunded the police, they did that’”