“For the governor of the state not to support President Trump was a big mistake (for the party),” said Carol duPont, speaking at a “State of the State” meeting held Nov. 13 at Burr and Burton Academy.

“We had our big party meeting Nov. 4 with all statewide Republicans, (and) I can tell you that our new state party chair, Deb Billado of Essex Junction, is a businesswoman and a big Trump supporter,” she said. 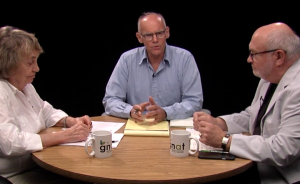 DuPont said she and fellow GOP members in the area held the public meeting because Vermonters aren’t paying attention to what’s going on under the Capitol dome in Montpelier.

Dupont has served as chair for the past five years. Her spouse, Tony duPont, a retired aeronautical engineer who pioneered spaceplane technology, is related to the notable duPont family of Delaware.

“There’s so much going on in Montpelier that is affecting so many people here and they just aren’t paying attention,” duPont said. “Either they have so many problems in their own lives … working too hard to keep themselves going, not having the time, or are distracted with what I call ‘survival distractions.’ Both parents are working and the kids — God knows what’s happening there — are facing serious problems.”

DuPont said it’s hard to tell how Republicans feel about the state of the state within Bennington County, but it’s clear that some aren’t happy with the party leadership at the top. She believes that Scott isn’t helping the party from the top.

When it comes to Bennington County legislators, duPont doesn’t view things in partisan black and white, particularly if they’re doing what’s best for Vermont’s future while helping to grow the economy and expand quality job opportunities.

“Locally, I think we’re moving the party as best we can,” she told True North Reports. “I am very fond of all the Bennington County people we invited to our state-of-the-state forum, Republicans as well as Democrats. … They are impressive regardless of party.”

She added that Vermont has become a welfare state, with Bennington County being ground zero. “Forty-eight percent of the state is on welfare,” she said.

Following the conclusion of the state-of-the-state forum, duPont said she was pleased with hard-hitting audience questions to forum participants about the local economy.

“(Regardless of party affiliation), I certainly don’t have any problems with bright people working hard to solve all the many problems we face,” she said. “I am happy with the leaders we have here in Bennington County but there’s so much work that’s ahead of us.”