A 2006 Vermont state law requires Vermont adopt any air emissions regulations first adopted by the State of California. When the law passed, it was seen as a way to reduce smog levels more quickly than less aggressive federal emissions standards. But earlier this year, Gov. Gavin Newsom decided California will ban sale of new ICE vehicles by 2035, with a ‘ramp down’ beginning in 2026. 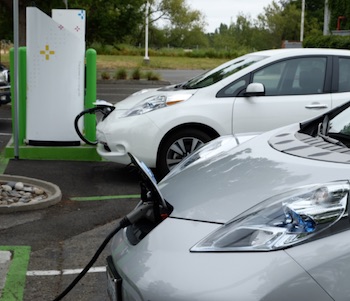 “I’m a big proponent of EVs,” Gov. Phil Scott answered. “I do believe we have to wean ourselves off internal combustion vehicles as soon as possible.”

In response, the Scott administration has pushed similar regulations into the state regulatory approval pipeline. The move to non-gas powered vehicles is seen as a major step to achieving carbon emission goals.

“I’m a big proponent of EVs,” Scott answered. “I do believe we have to wean ourselves off internal combustion vehicles as soon as possible.”

Hydrogen-powered cars are available for purchase in the U.S. market. The Toyota Mira, the Hyundai Nexo, and the Honda Clarity all sell for about $60,000. Electric cars also cost significantly more than ICE cars.

Other New England states are backing away from going along with the CA ICE ban. New Hampshire has never been part of the multi-state pact. Critics of the proposed ban say it would drive Vermont car buyers to New Hampshire. Scott added that carmakers such as Ford and GE may not be selling ICE cars by 2035.

Earlier in the press conference, a reporter asked Scott how he likes the new EV pickup truck the State of Vermont bought for transporting him.

“It really is amazing in a lot of respects,” the retired professional race car driver said. “It has incredible torque, pickup, quiet. No complaints thus far.”

Scott was asked if he’s concerned that making Vermont reliant on electricity for transportation would worsen the impact of a widespread power blackout. He said the same problem would exist with ICE vehicles if gasoline becomes unavailable, and that hydrogen vehicles wouldn’t be susceptible to power blackouts.