In the Covid-19 crisis, Governor Scott and his team succeeded on one front. Smartly and speedily, Vermont expanded its hospital capacity to accommodate nearly 1,000 Covid-19 patients at any point in time.

This was the sole goal of the “flatten the curve” campaign. “Flatten the curve” acknowledges Covid-19 is here to stay, concedes many hospitalizations will come from it, and aims to stretch these needs out so our hospitals aren’t overrun.

We could all support this as reasonable. Every state rose to this occasion. No state’s hospital system, not even New York City’s, was ever overrun.

That was the health crisis justifying Governor Scott’s emergency order. Now we have a bait and switch. 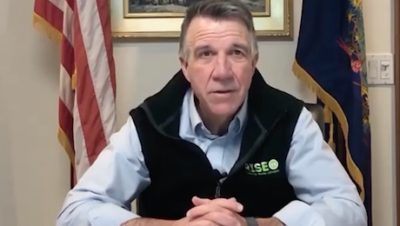 It’s now “kill the virus,” which, using Governor Scott’s extreme policies, really means “kill the economy.” In another show of poor leadership, he never explained why he changed his agenda and, most important, why he thinks this is achievable.

Where is the data justifying 6 feet of distance as opposed to 3, or even 2? There isn’t any.

We can’t keep our economy and people on a knife’s edge. No one can plan anything because the governor, on thin constitutional ice already, might on a whim close his famous spigot. There may or may not be a vaccine. What are his standards? What is his endgame? What is his way out of this mess? We need positive leadership and certainty, not fear and fiat.

Can we really trust someone who thinks getting a haircut is dangerous?

Was it necessary to close small bakeries, cafes, and mom and pop businesses that never have more than a handful of people at the same time? Of course, it wasn’t. This isn’t an “abundance of caution,” it’s reckless, and more so in a place like Vermont with a chronically fragile economy.

Governor Scott tells us that we must endure more economic ruin, more loss of schooling, and more failing businesses because “we’re close to where the big outbreaks are.”

Doesn’t he think we can look at a map? Of the 934 Covid-19 cases, nearly half — 434 — are in Burlington and the towns near it. This area is as far from Boston and New York City as we can get. Bennington County, 50 miles from Albany, has only 60 cases.

Governor Scott closed all doctors offices and barred hospitals from performing nearly all surgeries. He’s flattened one curve but invited another. Deferred cancer treatments, screenings, dental care, child vaccinations and checkups, hip and knee replacements, and scores of other pent up needs will tax our medical system for many months.

How many times have we heard of friends or relatives discovering during a routine checkup that they have an early, treatable cancer? Governor Scott and his people have so frightened the public that even emergency room visits have dropped.

Now in financial peril, with layoffs, can our hospitals meet this bubble in deferred care? Why were these questions never asked? If there’s a health emergency, it’s in the new bubble Governor Scott has created.

There are four remedies we need to take since Governor Scott believes he can extend the state of emergency forever. We need stability and predictability.

First, there is no state of emergency. Governor Scott needs to cancel his order. He needs to clean up outstanding messes like getting at least our rural schools open and easing the killer regulations imposed on our hospitality sector.

Schools should reopen on June 1 and run through July 4. If Burlington and other cities can’t manage this, fine. The rural schools like Arlington’s can.

People know all about social distancing now. Governor Scott’s extreme policies in effect have canceled the summer and fall tourist seasons. No one will plan to come here. If there’s a spike of 10 or 20 infections, he might close the state down again.

Innkeepers and visitors need to use common sense. They can do it.

Second, he needs to broaden his medical advice team. His current group are not practical people. They live in a bubble, in a safe space of laboratories, classrooms, and offices. They rely too much on abstract computer models, all of which have proven wildly inaccurate.

This is a problem in many parts of the sciences. Mathematical models have supplanted empirical evidence. Lots of academics and public health bureaucrats never get their hands dirty in real life medical practice.

Third, Governor Scott and his team need to communicate what we know about Covid-19. They show no interest in the amazing, dramatic advances in Covid-19 care over the last two months, all coming from emergency room and working hospital practitioners.

I see no evidence he has adjusted his policies to reflect this frontline experience, which is positive and shows Covid-19 is something we can handle in the context of a normal life and simple caution.

We know that more than 85 percent of Covid-19 infections are either asymptomatic or lead to a very mild cold. We know 95 percent of deaths in America are people who were in nursing homes or people, almost all elderly, with advanced cancer, dementia, blood disease, obesity, severe respiratory illness, diabetes, or high blood pressure.

If you are under 18, your chances of Covid-19 death are about the same as dying in a car crash on the way to school. These are all facts Governor Fear won’t share.

Instead of peddling fear and making our children into neurotics, Governor Scott needs to emphasize these facts. Why is he running away from them?

Finally, there is an enormous debate among virologists, epidemiologists, and, yes, even academics on the merits of many aspects of extremist lockdown programs. Many would argue some of Governor Scott’s policies are useless or counterproductive.

I suggest that the governor assemble a selection of “lockdown skeptics” drawn from Stanford, Rockefeller, and Oxford Universities. This large group of scientists includes Nobel laureates, distinguished professors and scientists, and emergency room doctors and practicing doctors treating patients in hospitals.

I suggest he convene a televised question and answer session with a handful of these people, his advisers, and the chairs and ranking members of the legislature’s committees on health care, health and welfare, and human services.

Events of this kind are occurring in other states. Why not in Vermont?

We need more voices and a lively debate to compensate for “follow the crowd” leadership and leadership by fear.