Billing itself as 350.org’s climate-resistance campaign, Fossil Free Fast kicked off an anti-Trump campaign 2020 lobbying effort Wednesday via the internet.

The pep rally-like event — co-hosted by 350.org founder and environmentalist Bill McKibben of Middlebury College, and black activist Rev. Lennox Yearwood, Jr. — not only focused on ending America’s reliance on fossil fuels, but over the course of 90 minutes cleverly weaved-in every banner Democrat-progressive cause from immigration and white-male supremacy to free college tuition and single-payer health care.

The event, which was aimed at community-based activists around the U.S., was broadcast from the Piscataway Indian Nation in Maryland, near Washington, D.C. Viewers could either watch the event streamed at home or attend a variety of public-screening sites, including several around Vermont.

As a response to President Trump’s State of the Union address, the left-leaning campaign involved U.S. Sen. Bernie Sanders, I-Vt., and McKibben making keynote addresses to viewers, among others. 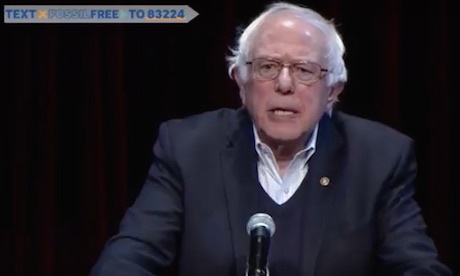 “Thank you … for standing up for our environment, for standing (up) to the fossil-fuel industry and telling them short-term profits are not more important than the future of our planet,” Sanders said.

He added: “It’s not just that Bill McKibben is a neighbor of mine in Vermont, it’s that I am … truly inspired by the work that you are doing and the understanding that, while Donald Trump wants to divide us up, you are helping to bring people from all walks of life together.”

Sanders said climate change is not just an American problem, but a global crisis: “It’s imperative that we bring people from all over the world to help save this planet.”

When Sanders first referenced President Trump and his State of the Union address, the audience booed.

“It was my job as a U.S. senator to have to be there (last night); it’s what I gotta do. But among the many absurd and dishonest, and ugly things that he said … if you go to the scientific community and you say to them what is the major global crisis that we face, the vast majority will say it is climate change … a life and death issue that we have to transform our energy system away from fossil fuel to sustainable energy. And yet Donald Trump spoke last night for over an hour (and) … somehow he forgot to mention the words climate change. What an outrage. We should not be surprised.”

Sanders mocked Trump, saying sarcastically that he was “one of the great scientists of our time.” He also said that Trump believes climate change is “a hoax from China.”

“Horrifically and dangerously, (Trump) has appointed administrators of the EPA and Department of Energy who are doing everything they can to stop the movement to sustainable energy,” he added. “… We will knock on doors and get involved in grassroots politics (for 2020). … We have to tell Donald Trump and the Koch Brothers, and all of these people, that their days are numbered, fossil fuels’ days are numbered, we are going to transform our energy system.”

While it may have been a chilly 17 degrees in Vermont’s winter wonderland, Sanders claimed that 2017 was the second hottest year on record after 2016 without citing any scientific sources.

Bill McKibben, who followed Sanders, said he came up with the title “Fossil Free Fast.”

“I forgot just how zealous some of our colleagues really are,” McKibben said, holding a Vermont apple. “There’s a reason for this apple. … I started hearing from people asking, ‘When do I start fasting?’ What? I am glad that everyone is so committed that they would go without food if need be. … But we need you strong.

“We have to go swiftly, rapidly, with dispatch. … We are behind. Things are not going well — think about the last six months in this country. … We had the biggest rain storm in American history … the longest blackout in American history … wildfires in California … mudslides. … We’ve changed the world, we’re breaking it.”

Rev. Yearwood, responding after McKibben spoke,  said, “I didn’t know we were supposed to be depressing people … but I can add to that. … (Trump is using his) power to damage our communities. After (Obama) we went off a cliff called Trump, Koch and Exxon.”

McKibben and others at the Fossil Free Fast event said community activists will be knocking on doors over the next months and getting involved in local politics to reverse Trump energy and social policies, which they claim are both dangerous and irresponsible. The grassroots effort will be well underway in advance of the fall 2018 mid-term and the 2020 national elections.

9 thoughts on “Coming to a town near you: ‘Fossil Free Fast’ climate crusaders”