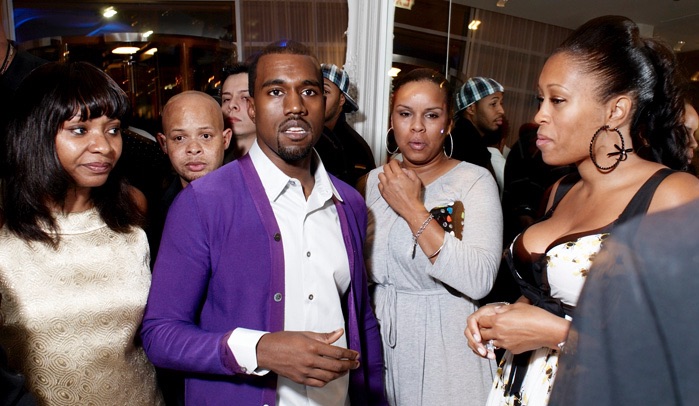 Rapper Kanye West again defended his support for President Donald Trump on Thursday, this time in the Oval Office of the White House, where he also discussed prison reform, North Korea and the Second Amendment.

To some of Trump’s most vocal critics, West said it’s not beneficial for the country if Trump doesn’t look good on the world stage.

The president seemed to approve.

“I tell you what, that was pretty impressive,” Trump said of West’s comments. “That was quite something.”

A reporter asked Trump whether West was a possible “future presidential candidate.”

The president said that West “could very well be.”

“Let’s stop worrying about the future. All we have is today,” he later said.

Kanye West: “I love this guy right here. Let me give this guy a hug.” pic.twitter.com/fuHyzkW37X

Trump and West were joined by pro football Hall of Fame running back Jim Brown and the president’s son-in-law and adviser, Jared Kushner.

Trump touted the progress of denuclearization negotiations with the regime in North Korea.

“Dialogue. We are having dialogue,” Trump said, later adding, “It was headed for war.”

West said, “I spoke to President [Barack] Obama, and I will tell you that it was headed for war. … You stopped the war.”

Trump responded, “We did stop the war, saved millions of lives.”

West said of Trump, “Day One, solved one of his biggest problems.”

Trump cautioned: “Not solved yet, but I think we’re well on our way.”

On prison reform, West spoke of a 68-year-old inmate whose case he is raising with Trump and asking for presidential clemency.

Larry Hoover was the head of the Gangster Disciples group in Chicago, according to the Chicago Sun-Times. Hoover is serving a life sentence in a federal prison in Colorado.

“Really, the reason why they imprisoned him is because he started doing positive [things] for the community,” West said. “He started showing that he actually had power. He wasn’t just one of a monolithic voice, that he could wrap people around.”

The rapper said Trump’s push for prison reform was a matter of “bravery.”

To a reporter’s question about gun violence, West said, “The problem is illegal guns. We have the right to bear arms.”

West also said there’s too much political division between red and blue states, “like gangs.”

“We have to release the love throughout the country,” West said. “We don’t have the reparations [for slavery], but we have the 13th Amendment.”

The 13th Amendment to the Constitution banned slavery.

Asked about a 2005 comment he made about then-President George W. Bush, West said he was caught up in a “victim mentality” when, at a fundraising event for survivors of Hurricane Katrina in New Orleans, he said Bush didn’t “care about black people.”

“I don’t speak in sound bites. … You are tasting a fine wine,” West said of his wide-ranging remarks at the White House. “It has complex notes to it.”

Trump later asked the much quieter Brown, 82, for input.

Kushner and the president’s eldest daughter, Ivanka Trump, joined West, Brown, and the president for lunch. On the menu was caprese salad with balsamic glaze and a main course of roasted chicken with fingerling potatoes and sauteed asparagus.

According to the White House, the five were to discuss urban revitalization, new workforce training programs, more manufacturing jobs, tax incentives to open businesses in underserved communities through the Opportunity Zone program, and crime in Chicago.

“By prioritizing criminal justice reform, President Trump is working to keep our streets safe while giving second chances to those who have paid their debt to society,” said former Virginia Attorney General Ken Cuccinelli, a signatory to the Right on Crime statement of principles, in a statement. “Prison reform would help former offenders return to their families and communities as law-abiding, productive members of society.”

The First Step Act, which is places prisoners in rehabilitative programs to make it less likely that they will re-offend after they are released from prison. The measure already passed the House.

“Congress has an opportunity to incorporate effective reform that makes public safety a priority,” Cuccinelli added. “Reforms like the ones the White House has embraced have shown promising results—especially in reducing repeat offenses and allowing ex-offenders to obtain jobs. The Senate should pass the First Step Act, which was overwhelmingly passed by the House of Representatives last spring.”