Many praised Montpelier High School when it became the first school in the nation to permit the Black Lives Matter flag to be displayed in February 2018 for the stated purpose of educating white people about issues of race. Recently, Randolph permitted a similar display, in which one student commented “even though raising the flag is not intended as a threat to white people, it can sometimes be interpreted as such.”

I examine here what I submit are serious problems with sporting the Black Lives Matter flag at our schools. 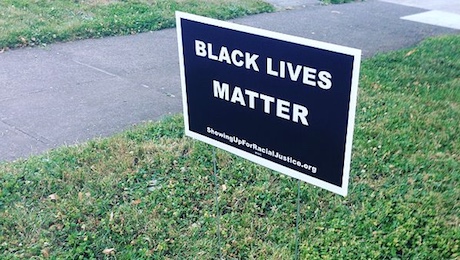 Klar: “I have no objection to the stated goals of Black Lives Matter, insofar as they seek to prevent systemic violence against people based on their skin color (or other prejudices).”

What is the difference between the BLM flag and the Confederate flag, of which some would say “even though raising the flag is not intended as a threat to black people, it can sometimes be interpreted as such”? Clearly these flags are very different in history and meaning — but do they share this potential for conflicting messages, and as such are perhaps dangerous “teaching” tools?

I have no objection to the stated goals of Black Lives Matter, insofar as they seek to prevent systemic violence against people based on their skin color (or other prejudices). But BLM is not so clear about the means it embraces to achieve those goals.

In the 1960s civil rights movement, division existed between black leaders who sought to use peaceful protest to effect change (most notably, pastor Martin Luther King) and those, like the Black Panthers and Malcolm X, who advocated for violence to achieve equality for blacks.

BLM claims that the United States is guilty of a national systemic racism that kills black people. I’d like to think that is not true of Vermont. But BLM’s Burlington chapter website begins with this statement: “For the master’s tools will never dismantle the master’s house. They may allow us to temporarily beat him at his own game, but they will never enable us to bring about genuine change.” (Audre Lorde). This is directly reminiscent of Malcolm X’s famous speech on Jan. 23, 1963, in which he differentiated between “house negroes” who lived in the master’s house, and who cared that the master recover when ill, and “field negroes”:

But then you had another Negro out in the field. The house Negro was in the minority. The masses — the field Negroes were the masses. They were in the majority. When the master got sick, they prayed that he’d die. [Laughter] If his house caught fire, they’d pray for a wind to come along and fan the breeze.

I am not arguing that BLM is identical to Malcolm X and his ideology — I am arguing that it is fuzzy at best. This has been why some white people (and some smart non-white people) perceive the BLM flag as a threat. This group is dangerously unclear in its methodology and has a history of physically disrupting events, with no clear leadership or plan of action as pointed out in the New Yorker.

For instance, what exactly does BLM mean on its website (about BLM) that “We are self-reflexive and do the work required to dismantle cisgender privilege”? Or “We are committed to dismantling the patriarchal practice that requires mothers to work “double shifts” that require them to mother in private even as they participate in justice work.” Huh? Are the Montpelier and Randolph school principals shepherding the kids to “dismantle” these patriarchal, cisgender oppressions of the master’s house?

Small wonder BLM is oft compared to the Occupy Wall Street “movement,” an anarchic group of sign wavers with no shared leadership or message. It is clear why so few of Vermont’s high schools would pride themselves on flying a flag representing such vague and undefined ideas, some of which hint at violence (Antifa and BLM often protest and disrupt together). Right there, at its Greater Burlington home page, BLM begins with ideas about “dismantling” the “master’s” house, using his own tools to “beat” him. Interesting way to teach young people about racism. I was taught in school that a shared house was an option. Did these school administrations in Vermont inspect these sites?

A flag does not mean the same thing to all people (despite efforts to narrow its meaning solely to a racist one). Perhaps some white rednecks should be able to fly one — there is no leadership behind an organization, and no concrete ideological message. And if in fact it represented advocacy of one race conquering or defeating another, whites over blacks, it would form a strong counterpoint in Montpelier High School’s stimulating race conversation.

I support the freedom of citizens to display a swastika if they wish, as the United States Supreme Court clearly established in National Socialist Party of America v. Village of Skokie, 432 U.S. 43 (1977). But I oppose the swastika being flown at a state-funded public school, even if it’s part of an effort to promote free speech, because it could appear that the institution is endorsing it.

Martin Luther King fought tirelessly for civil rights from a profound sense of Christian duty. He said one fights darkness not with more darkness but with light; that we fight hate with love. Malcolm X called Martin Luther King a 20th century Uncle Tom — the equivalent of a House Negro — criticizing King’s non-violent approach and calling for liberty and equality “by any means necessary.” BLM’s leaders similarly criticize the peaceful avenue, as recounted in the New Yorker piece above. King opposed what he considered Malcolm’s “dangerous radicalism,” saying of Malcolm: “Fiery, demagogic oratory in the Black ghettos, urging Negroes to arm themselves and prepare to engage in violence, as he has done, can reap nothing but grief.”

Perhaps today’s America no longer wishes to “discriminate” between the diametrically opposed methodologies of these two very intelligent, passionate men; but I assert that the two paths towards a goal of equality still remain — one is violent, the other peaceful. It is eminently unclear which path BLM represents, and it is therefore incumbent upon our school leadership to explain their position. Are the schools in Randolph and Montpelier stating that blacks are systematically oppressed by the state of Vermont? Are they standing against cisgender dominance, patriarchal privilege, or double shifts for mothers in justice work? All of the above? And, are they endorsing the belief system of Malcolm X or Martin Luther King? It’s kind of important.

Additionally troublesome, these schools essentially delegated this race conversation to black students, rather than lead it for all. I do not doubt the intention was good, but the stated goal was to educate white people about racism. Yet per Audre Lorde, “expecting a marginalized group to educate the oppressors is the continuation of racist, patriarchal thought.” By that measure, the schools that permitted the BLM flag assisted their black students to become Uncle Toms.