By Kyle Perisic | The Daily Signal

Florida Gov. Rick Scott has signed into law a bill banning so-called “free speech zones” at public universities and allowing students and speakers to sue the schools for violating their First Amendment rights. 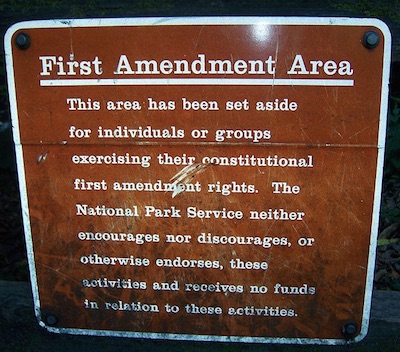 “This area has been set aside for individuals or groups exercising their constitutional first amendment rights.”

Free speech zones are limited areas, sometimes only fractions of a campus, where students may express themselves freely. Critics argue that an entire campus should allow free speech, not small and restrictive areas.

The legislation, called the Excellence in Higher Education Act, reads: “A public institution of higher education may not designate any area of campus as a free speech zone or otherwise create policies restricting expressive activities to a particular outdoor area of campus.”

Students, faculty, and staff of a public institution of higher education may not “materially disrupt previously scheduled or reserved activities on campus occurring at the same time,” the new law says.

“No one has a right to shut down speech simply because it makes someone feel uncomfortable,” state Senate President Joe Negron, a Republican who made passage of the bill a top priority, said in a press release.

“Florida’s universities will continue to achieve national distinction because they are training our students to articulate and defend their ideas in an open, responsible way that prepares them for the real world.”

Supporters of the legislation pointed to the riots in February 2017 at the University of California, Berkeley, when demonstrators prevented libertarian commentator Milo Yiannopoulos, a Florida resident, from speaking on campus. Berkeley spent nearly $800,000 on security.

The Foundation of Individual Rights in Education, or FIRE, a nonprofit dedicated to protecting free speech on public universities, supports the law.

The “cause of action” clause in the new Florida law says:

A person whose expressive rights are violated by an action prohibited under this section may bring an action against a public institution of higher education in a court of competent jurisdiction to obtain declaratory and injunctive relief, reasonable court costs, and attorney fees.

The Florida American Civil Liberties Union supported the bill except for the cause-of-action provision.

Although lawmakers removed a provision on compensatory damages, Florida ACLU spokeswoman Gaby Guadalupe told Campus Reform, the law will allow someone to sue a university, students, and faculty “for students booing too loud or too long in reserved spaces on campus.”

Cohn said the state ACLU affiliate is “wrong” about that, unlike other affiliates, but his group looks forward to “working with them on issues of common ground.”

The new law “ensures that our taxpayer-funded college and university campuses remain open for the free, safe, and respectful expression of differing points of view,” Negron said. “Dating back to antiquity, institutions of higher education have served as a forum for free speech and the open exchange of ideas.”