Truth in Accounting ranked Vermont 48th out of 50 states in terms of financial transparency. The ranking is a composite score based on eight criteria of different weights.

Vermont scored decently well in “timeliness” of publishing, receiving a seven out of 10 possible points. We also got 10 out of 10 points for “Off-Balance Sheet Liabilities,” but every New England state received a perfect score there as well.

In terms of accessibility, we were nearly perfect with four out of five points. Then again, every New England State got a four, except Rhode Island. “Pension data timing” refers to a state measuring the net pension liability using the same date as the CAFR. Like all New England states, we scored a two out of five in this area, suggesting we can all do better at using the same data. 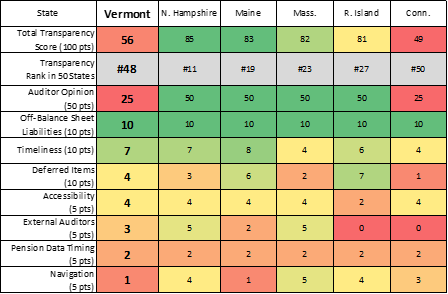 “Navigation” refers to a CAFR being searchable with useful links from the table of contents and bookmarks. We tied with Maine for lowest in New England, receiving a one out of five score. In the external auditors’ category, Vermont got a three out of five. Evidently, Vermont did not meet the full criteria for out CAFR being audited by an auditor who is not an employee of the government.

Finally, the big separator, Auditor Opinion. Truth in Accounting states: “Vermont received a low transparency score primarily because its pension plans do not produce separate audited financial reports. Instead, their GASB 68 reports are unaudited. As a result, we deduct 25 points from the Clean Opinion criteria, which is dependent upon opinions from both the state CAFR and the largest pension plan CAFR.”