By Joshua Nelson | The Daily Signal

A first-of-its-kind paper on private school vouchers in Milwaukee, Wisconsin, looks beyond student test scores and focuses on the impact the school choice vehicle has on crime reduction.

“We took a representative sample of participants in the [Milwaukee Parental Choice Program] and carefully matched them to similar Milwaukee public school students and then tracked their outcomes over time,” Patrick Wolf, professor at the University of Arkansas’ Department of Education Reform, told The Daily Signal in an interview about the new paper. 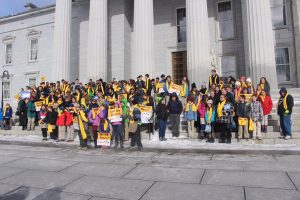 Dozens of Vermont students who attend the school of their choice using the state’s town tuitioning system crowd the steps of the Statehouse in January 2018.

“Initially, those outcomes focused on test scores,” Wolf said, “but test scores are not everything that we want from a child.”

Wolf and Corey DeAngelis, an education policy analyst with Cato Institute, evaluated the Milwaukee Parental Choice Program, first launched in 1990. It is commonly referred to as the nation’s first modern school choice program, providing vouchers to Milwaukee’s low-income students for use in private schools.

The test score analysis, which began in 2007 and ended in 2012, found the program had positive effects on students’ reading scores, but little impact on math. However, in the the latest analysis titled “Private School Choice and Character: More Evidence from Milwaukee,” the evidence is clear: School choice alleviates young adult crime.

In this paper, Wolf and DeAngelis evaluated non-test score impacts of school choice such as student character.

“It was mainly driven by our appreciation that test scores aren’t the only things that matter in the formation of young people,” Wolf said. “We expect [schools] to shape all young citizens. Avoiding arrest and conviction for crimes — that’s really an important measure of how successful schools have been in preparing responsible young citizens.”

According to the paper, students who took advantage of the school choice option committed fewer crimes than counterparts in public schools. As young adults, these students committed about 53 percent fewer drug crimes and 86 percent fewer property crimes.

The results also show 38 percent fewer paternity suits filed once students reach their mid-20s. These suits occur when there is difficulty identifying a child’s biological father so child support can be properly paid.

“The simple interpretation is that access to private schools of choice for students in urban environments lead to certain payoffs in terms of character development,” Wolf said. “Somehow these private schools are doing a more effective job of shaping the character and influencing the responsible decision-making of young adults.”

Since Wisconsin is the only state in the U.S. that publishes every citizen’s record of criminal charges and convictions in a database searchable by the public, the report’s research team was able to easily cross-reference its voucher student information with the state’s criminal records database.

In the mid-2000s, Wolf said, policymakers were conflicted about changes to be made to the voucher program, which had not been analyzed since 1995.

When Wolf and DeAngelis pitched to the legislators their idea to study the program in 2007, supporters and skeptics agreed on a new regulation that lifted the enrollment cap so more students could be evaluated.

So it was lawmakers’ reaching across the aisle that later would reveal the hidden gem of school choice’s benefits in preventing crime among young adults.