“The above referenced title is on your library bookshelf and I’m requesting it be removed immediately. Your board & school owe the community answers regarding criteria for reading materials. To have such overt objectionable material reaching our children is unacceptable,” Broyles wrote.

The controversial book is “Gender Queer: A Memoir,” written by California-based author Maia Kobabe. It has made headlines across the nation as parents have discovered it in school libraries and expressed outrage over its explicit sex illustrations and language. Kobabe’s supporters argue critics are being insensitive to the LGBT community. In October, the author wrote an op-ed in the Washington Post defending her book. 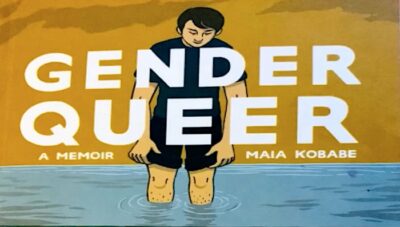 In his email to trustees, Broyles described some of the graphic art, which could not be published in this article due to explicit youth sex representations.

He included multiple images from the book in his email. School board members did not return TNR’s request for comment.

Nicole Solas of Wakefield, Rhode Island, posted some of the book’s sexually explicit material on Twitter, but the social media giant hides the images with a warning about “potentially sensitive content.”

Book illustrations include everyday scenarios that LGBT youth may encounter related to sexuality and gender. One story thread in the book is of a young woman expressing curiosity about gender; she starts to wish aloud that she had been given a gender-neutral name.

“I also want to have the best interest of young people at heart. There are queer youth at every high school — and those students, that’s [who] I’m thinking about, is the queer student who is getting left behind,” Kobabe said.

Her critics say she does not adequately address the graphic sexual nature of the book’s illustrations.

“How people come to terms with their sexual orientation, however, can make a difference, and that includes how children are taught to feel about their sexuality. Banning books such as ‘Gender Queer’ from school libraries only hurts young people needing to affirm their gender or orientation, whatever they may be,” he wrote.

Libby Emmons, writing for the Post Millennial, said the book is inappropriate for schools, and she blasted its defenders.

“A controversial book that caused firestorms of parental anger upon being found in the libraries of public schools from Virginia to Rhode Island, showing graphic sexual imagery about the sexual and gender identity awakening of teenagers, is being defended by the mainstream press and publishers,” Emmons wrote.

Broyles was even more direct in his letter to school board members. “‘Gender Queer’ would be categorized as child pornography, if there was a genre selection box to check. By allowing this book on your shelf, you’re demonstrating tacit approval of the material.”