Vermont is going to get $55 million more in transportation funds than it may have gotten if federal money wasn’t restored for the nation’s transportation restoration and maintenance efforts.

The federal program, Fixing America’s Surface Transportation (the FAST Act) runs for five years, distributing $305 billion to state transportation agencies through 2020. The rescission proposal was to slash it by $7.5 billion, but with that money restored, Vermont gets about $220 million per year.

“This funding represents the primary way in which Vermont funds state transportation projects, and it generally accounts for half the state’s total transportation budget,” a VTrans press release states.

Sen. Patrick Leahy, D-Vt., vice chair of the Senate Appropriations Committee, said he is pleased that the money is back.

“Our highway system is critical to a strong economy and this funding will help us continue to maintain the roads that Vermonters count on daily, and visitors use to travel and enjoy our beautiful state,” he said. “I appreciate our congressional delegation’s support of this important funding.”

Transportation Secretary Joe Flynn said the funding ensures that Vermont  can continue with all of its planned construction projects in 2020 “to maintain Vermont’s state and interstate highways for the traveling public.”

According to the American Society of Civil Engineers annual report card for states, in 2019 Vermont received a C grade for its overall infrastructure. Regarding transportation including bridges and roads, Vermont ranked C+.

“On average, approximately 5 percent of bridges are structurally deficient, compared with 9.6 percent in 2012,” the report card states. “The decrease in structurally deficient bridges has been accomplished despite a recent shortfall in funding. However, progress could be slowed or even reversed without a clear and consistent funding mechanism that provides long-term support for bridge infrastructure.” 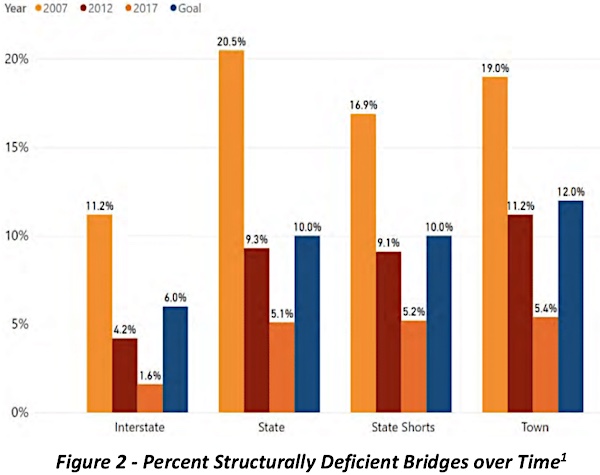 Vermont has made significant progress in addressing bridge needs over the past 10 years. VTrans set a goal for percentage of bridges that are structurally deficient at 6% for the interstate, 10% for state bridges, and 12% for town bridges. For the period 2007 to 2017 the deficiency status of interstate, state, and town bridges has greatly improved as shown.

On roads, the report from the civil engineers said by one measure, “the state currently only has approximately two-thirds of the funding it needs to maintain its assets in a state of good repair,” adding that severe winter storms have proven challenging for regular highway system operations and maintenance.

“I do know that it’s something we’re really looking forward to,” he told True North. “As Vermonters know, we have tried over the years to upgrade our bridges and do some more paving and help communities.”

He added: “This is a tremendous boost to us. We now can either get further ahead on our projects, and get some badly needed infrastructure improved, because we were worried about … what would happen.”

Vermont spends about $115 million in road paving each year. This latest development might enable the state to boost paving by another $20 million. Mazza said Vermont has a lot of projects “ready to go,” but which haven’t had the necessary funding.

“We were in bad shape, especially on our bridges, and we’ve made a tremendous amount of progress in the last couple of years,” Mazza said. “We are getting ahead of the curve now; we’re where we want to be.”

He said a lot of the money gets directed to helping municipalities who otherwise are limited to local tax revenue.

“We help municipalities on some of their projects,” he said. “If we can balance it out with everybody, we’re all set.”