Presidential advisor Dr. Anthony Fauci today told Vermont press and officials he would not hesitate to take a Covid-19 vaccine approved by the U.S. Federal Drug Administration (FDA). He expressed hope it will be developed by November or December and available for public use by as soon as January.

He also said citizen pushback has hindered federal imposition of a national mask mandate. And he called “politically charged” a question asking if lives would have been saved had reporter Bob Woodward promptly disclosed President Trump’s publicly downplaying the virus in early 2020. 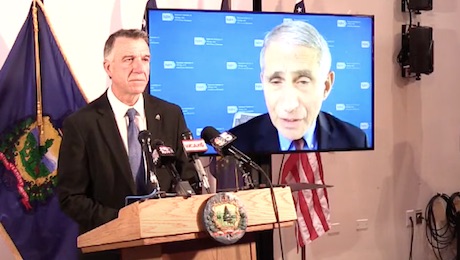 Fauci praised the State of Vermont’s efforts to achieve its lowest-in-the-nation Covid-19 positivity rate. Yet he urged Vermont to stay vigilant: “This virus is a formidable foe,” he told Caledonian-Record reporter Andrew McGregor. “You give it an opportunity to rear its ugly head [in either rural or urban areas and] that virus is going to take advantage of that.” States that relax could “see surges that take us back months,” especially as the U.S. heads into the fall-winter “indoor” months.

Still, Fauci expressed hope the U.S. has “a safe and effective vaccine by November or December,” publicly available by January. “That’s aspirational but I think we can do it.”

Health Dept. Commissioner Mark Levine co-opted the last few minutes of the 30-minute press availability to prompt Fauci to “tell them why they should trust the vaccine that eventually comes out of these trials,” the advisor to the White House Coronavirus Task Force outlined the speedy progress of vaccine development as well as the extensive oversight and safety evaluation process for vaccine approval.

Fauci expressed strong personal confidence in the outcome: “If there’s a vaccine, I would not hesitate to take it, nor would I hesitate to recommend that my entire family take it.”

He was asked about the advisability of a national mask mandate. “The successful experience [in Vermont] could be a model for the country,” Fauci said. “One of the issues that has been discussed….is that there is such a degree of variability in accepting the mandates throughout the country. “If the citizens of a state, county or city are in lockstep there is not a big problem, as you have seen in Vermont.” But because in other parts of the country “anything that smacks as an authoritative statement is met with a lot of pushback…..A national mandate probably would not work.”

VPR’s John Dillon asked Fauci, “Do you think lives would have been saved” if journalist Bob Woodward had immediately gone public with his presidential interview in which Pres. Trump discussed publicly downplaying the potential impact of the virus.

“That’s a very politically charged question,” Fauci said. “I don’t think you can make those kind of extrapolations. ….you can always say what could have happened, should have happened. It just intensifies divisiveness. Rather than looking backward….I actually prefer to look forward.”

Vermont Daily was ready to ask Dr. Fauci if he supports mandatory vaccination. He signed off long before our turn in the queue, so we asked that question of Dr. Levine. Gov. Scott intervened: “I think we have a long ways to go before we come to that decision.” Levine said he liked the succinctness of Scott’s answer and said “there is no serious consideration at this time about mandating a vaccine.”

Responding to Avery Powell of WCAX, Gov. Scott also said he is unaware of the “no mask mandate” petition that has garnered more than 3000 signatures. “From my standpoint it [statewide mask mandate] has been essential” and will continue even as the economy and travel are opened up. A mask mandate will continue until there’s a safe and effective vaccine, Scott said.

Reporter Steve Merrill of NEK-TV said his mother was interned in a Nazi prison camp and his father was a guard at the Nuremberg Nazi trials, and then asked if forcing vaccination would violate post-WWII Nuremberg human rights protocols. Levine said “I’m an M.D. not a J.D. [lawyer],” and said that a mandate, if enacted, would not be a primary strategy.