On Dec. 4, the police chief gave a presentation at the Kellogg-Hubbard Library in Montpelier and took questions about the challenges of policing in an age when social justice philosophies are upending traditional ways of thinking about the profession.

During his speech, del Pozo shared personal views on sensitive subjects including police bias, use-of-force, politics and more. In particular, he admitted that his views on policing have drawn significant criticism from fellow law enforcement. 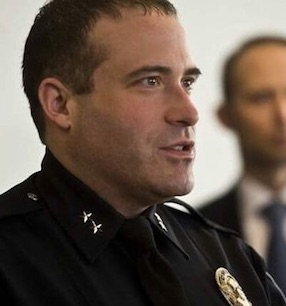 “We should always have these guns to protect ourselves and to protect the public, but we should treat the people in crisis as if we didn’t have them,” he said. “It’s an insurance policy, it’s not a means to impose will.”

He added that he shared those views in a recent New York Times Op-ed and received significant opposition from fellow law enforcement.

“[You should see] the hate-mail I got from police officers about what I wrote, ‘have a gun but speak as if you don’t have a gun.’

“They said, ‘You are just trying to get us killed, you don’t take your job seriously, and you’re not man enough to be a cop — and you should turn in your badge,'” del Pozo told his lecture series audience.

The controversy follows a similar Burlington-related flap from August when Progressive City Councilor Perri Freeman urged that the Queen City should disarm its police force, in keeping with certain European nations.

It’s been a difficult year for Burlington’s chief of police.

On July 4, the Burlington chief issued a string of about 10 tweets, quickly deleted the account, and later that month informed Burlington Mayor Miro Weinberger of his indiscretion. The mayor placed del Pozo on paid administrative leave in August, and he returned to duty Sept. 15, after being examined by both his doctor and a city-appointed independent medical examiner.

Del Pozo is not from Vermont. He was born in Brooklyn, N.Y., and spent two decades with the NYPD, advancing to deputy inspector before making his way up north to Burlington in 2015.

While in command of the 6th and 50th precincts in New York, he served overseas based in Jordan’s capital, Amman, as an intelligence liaison to the Arab world and India. While there he investigated terror attacks in an effort to better prepare his colleagues back in New York.

During his lecture, del Pozo also expressed his opinions about high-profile social justice controversies in national and local news, siding with social justice advocates in each case.

As one example, he recalled a local incident when controversial activist group Black Lives Matter blocked traffic in Burlington. He said he decided not to make any arrests, and even allowed the protest to continue.

“I said you have, on a one-time basis, blocked traffic to get the attention of the city and the university because you felt like you were being ignored,” he said. “It’s about race in America and about feeling ignored as a person of color. And not only do we have a history of ignoring them, but also of enslaving them, and lynching and segregating. I said you have a claim on this space for tonight.”

He also commented on a high-profile loitering case when two black men were arrested in Philidelphia for refusing to leave a Starbucks after they wouldn’t purchase anything from the store. He said the two men were victims of racial discrimination.

“They had a custodial manager of the premises who was invoking the trespass law,” del Pozo said. “The problem was, in my mind anyway, that the reasons that they were giving for brokering that type of cooperation weren’t reasons that apply to every American.”

During the question and answer period, one member of the lecture series audience suggested that the Burlington Police Department has a history of political discrimination against conservatives. The man said pro-life demonstrators are routinely targeted for police crackdowns, whereas liberal activists get a free pass.

Del Pozo said he does not endorse selective enforcement, and he added that he was not directly involved in the handling of the incidents in question. He reiterated his support for all political demonstrations.

“Political speech should be the most highly protected form of speech regardless of content,” he said.

Another audience member raised the issue of mental health, and del Pozo said that is one of the biggest challenges his officers face on a day-to-day basis, right up there with drug abuse.

“If you ask police officers right now what the biggest crisis is that effects the quality of life in their cities and what is claiming the most human lives, it would be the opioid crisis,” he said. “But then if you ask them what the biggest long-term problem is in American policing, it’s mental health.”

He said the issue intersects with drug abuse, homelessness and crime. He said some of the worst encounters that his officers deal with — often ones that end in fatal shootings by police — are cases that involve someone having a mental breakdown.

He continued that society is still dealing with the fallout of a move away from the institutionalization of mental health victims. He said it’s probably time the society takes more steps to help these people, and until then it’s largely up to the police to deal with them.