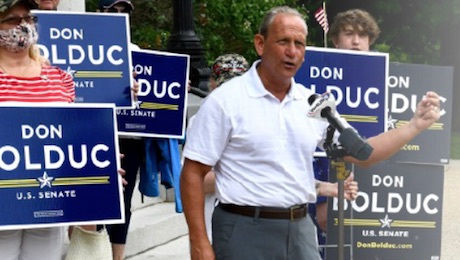 Bolduc, a retired U.S. Army brigadier general who has backed former Republican President Donald Trump’s claims that the 2020 election was stolen, narrowly edged out New Hampshire Senate President Chuck Morse, a moderate who was running with the backing of Republican Gov. Chris Sununu.

New Hampshire, along with Rhode Island and Delaware, were the last states to nominate congressional candidates ahead of the midterm elections. Election Day is eight weeks away.

With 85% of the ballots counted Bolduc had 37% of the vote to Morse’s 36% – a margin of about 1,200 votes, according to an unofficial tally in published reports.

“We’re one step closer towards defeating Sen. Hassan, flipping the Senate and bringing an Outsider to DC to fight for Granite Staters,” Bolduc posted on social media early Wednesday morning after Morse called him to concede the race.

In the Nov. 8 election Bolduc will face Hassan, a former New Hampshire governor who defeated Republican Sen. Kelly Ayotte in a narrow race in 2016 to win the seat. Hassan faced no serious opposition on Tuesday.

“This campaign will be a clear contrast between my record of delivering for the people of New Hampshire and Don Bolduc’s radical, backward-looking agenda,” Hassan said in a statement early Wednesday.

Sununu, who had been recruited by national Republicans to challenge Hassan, easily defeated three GOP challengers on Tuesday to win the party’s nomination to seek a fourth two-year term. He will face Democrat Tom Sherman, who was uncontested, in November.

Political observers say Sununu’s decision not to jump into the race could end up costing Republicans efforts to take over the Senate in November’s elections.

Republicans and Democrats each hold 50 seats in the Senate ahead of November, with Democratic Vice President Kamala Harris serving as a tie-breaking vote.

The nonpartisan Cook Political Report has rated the Senate seat as “lean Democrat” in the upcoming general election.

The Senate Leadership Fund, which is aligned with Senate Minority Leader Mitch McConnell, has reserved $23 million in TV ad spending ahead of the general election.