The number of Vermonters out of work and scrambling to provide for their families has skyrocketed two weeks in a row due to the Scott administration’s response to fears about the coronavirus.

Initial jobless claims rose to 14,633 for the week of March 28, up from 3,784 in the prior week, according to the Vermont Department of Labor’s unemployment insurance report released Thursday. The number represents a 286% single-week increase, and is an alarming 3,586% rise above the 397 unemployment claims filed the week of March 30, 2019.

The DOL estimates an additional 45,000 claims were filed but have yet to be processed.

Nationwide, weekly unemployment insurance claims doubled to 6.6 million, up from 3.3 million in the prior week. The collapse in jobs comes as governors across the country shut down their economies in an unprecedented experiment to limit the spread of the virus.

Since declaring a state of emergency on March 13, Gov. Phil Scott has taken drastic measures to halt economic activity. 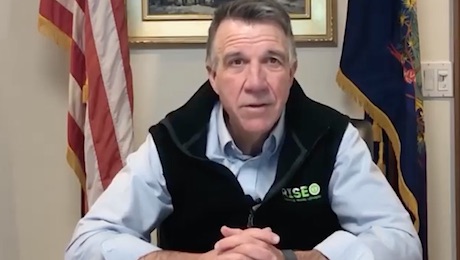 On March 16, Scott closed schools and ordered restaurants and bars to limit their activity to takeout and delivery. Scott also limited public gatherings to 10 or fewer people, and later closed most child care facilities.

Last week, all businesses and not-for-profit entities were ordered to put into place telecommuting or work-from-home procedures, and all Vermonters were told to stay home and minimize outside activities. Scott also directed all non-essential businesses and non-profits to cease in-person operations.

The combined restrictions have caused companies to lay off workers, forcing thousands of Vermonters to seek government assistance. The spread of the coronavirus has sparked worldwide panic, resulting in extreme responses from governments across the globe.

As of April 1, the state of Vermont reports 16 people have died from the coronavirus. Another 321 have tested positive, and 645 have recovered and completed monitoring. The vast concentration of COVID-19 cases — 164 — have occurred in Chittenden County. The state has conducted 4,495 tests.

Nationwide, the U.S. has seen 3,603 coronavirus deaths and 186,101 cases, according to the Centers for Disease Control and Prevention. Approximately 1,375 of those deaths, or about 38%, have occurred in New York City.

Over the three-week period ending March 14, Vermont had 23 people die of pneumonia and five die from seasonal flu. During the same time frame, about 8,785 Americans nationwide died of pneumonia and 1,374 from the flu. The weekly statistics are tracked by the National Center for Health Statistics Mortality Surveillance System.

No end in sight

Scott has stated that the economic shutdown may be imposed for months. President Donald Trump has a goal to relax federal social distancing guidelines as soon as April 30.

However, during Wednesday’s White House COVID-19 briefing, Dr. Anthony Fauci, a leading member of the White House Coronavirus Task Force, said social distancing should not be relaxed until “when it goes down to essentially no new cases, no deaths at a period of time.”

He added that the ultimate “game-changer” would be a vaccine, estimated to be available in 12 to 18 months.