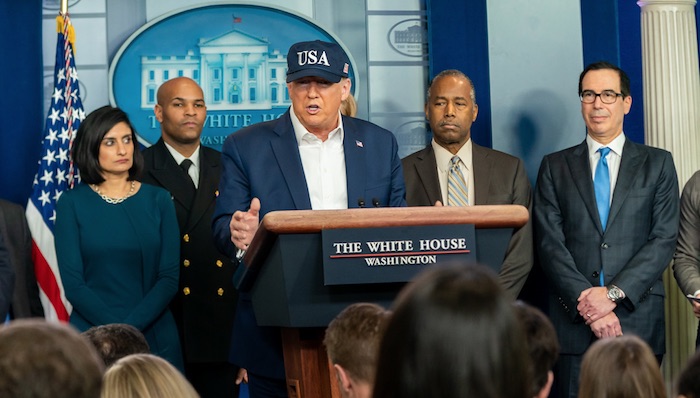 ECONOMY FIRST: President Donald Trump is signaling he is ready to slowly reopen the country for business while Gov. Phil Scott said Monday that Vermonters could face months of state-imposed economic shutdown.

While President Donald Trump said he is preparing to ease the U.S. economy back to health at the end of the month, Gov. Phil Scott on Monday said he expects to keep Vermont’s economy under lockdown for months to prevent the spread of COVID-19.

“This is going to be a very long recovery, in some respects,” Scott said, speaking at a news conference with U.S. Rep. Peter Welch, D-Vt., and members of his administration.

In his comments about the recent closing of restaurants, schools and “close-contact businesses”  — scheduled to last at least until April 6 — Scott hinted at a more protracted period of economic inactivity.

In addition, Scott announced an order directing all businesses and not-for-profit organizations to implement telecommuting or work-from-home procedures. These must be in place by 8 p.m. Monday, March 23.

Meanwhile the president is suggesting businesses might begin to open back up after the initial federal-recommended restrictions expire on March 31. Trump said in a tweet Sunday night that an economic recession or depression could end up hurting more Americans than the virus itself.

WE CANNOT LET THE CURE BE WORSE THAN THE PROBLEM ITSELF. AT THE END OF THE 15 DAY PERIOD, WE WILL MAKE A DECISION AS TO WHICH WAY WE WANT TO GO!

Trump’s comments echo those by Fox News host Steve Hilton, who recently spoke against the perpetual calls for an economic shutdown, which he claimed could result in 1 million American deaths.

“Our ruling class and their TV mouthpieces whipping up fear over this virus, they can afford an indefinite shutdown. Working Americans can’t, they’ll be crushed by it,” he said. “You know that famous phrase, ‘The cure is worse than the disease’? That is exactly the territory we are hurtling towards.”

Welch, who also spoke at the press conference, suggested federal money would be able to prop up the economy.

“This is where the federal government has to be aggressive,” he said. “[U.S. Treasury Secretary Steven Mnuchin] indicated in a conference with the Senate that we could have unemployment of up to 20 percent.”

Federal Reserve Bank of St. Louis President James Bullard has stated unemployment could reach 30 percent. The highest record rate of unemployment in the U.S. was 24.9 percent in 1933, during the Great Depression.

Welch, like Scott, says the economy must be sacrificed to get society through this health threat.

“This is an unprecedented challenge. We have a pandemic, and the recommended way of protecting our health is to compromise our economy,” he said. “People can’t go to work, businesses are closed down, people who had a job now don’t. And we know that we’ve got to take the steps required to protect our health, and we’ve got to do it no matter how painful they are.”

Welch said the latest estimates are that $2 trillion is coming from the federal government to help households and businesses. He hopes to get much of this money to small businesses.

Erin Sigrist, president of the Vermont Retailers and Grocers Association, was also at the press conference.

“We’re all trying to do our best to get through this as best as we can,” she said. “We ask that you take a little bit of precaution where necessary. We need to rest … and remember that the food and other necessities are available.”

As of Monday, Vermont has reported 75 positive cases of COVID-19 and five deaths resulting from the virus.

The most recent data from the National Center for Health Statistics Mortality Surveillance System indicates that over a three-week period ending March 7, there were 24 Vermonters who died from pneumonia, and three by the flu. During that same three-week stretch, about 8,335 Americans died of pneumonia and 1,289 from the flu.