News of the possible relocation was announced by the Addison County Economic Development Corporation (ACEDC) which was just awarded a $30,000 grant to undertake a study regarding the feasibility of EcoGlobal locating its headquarters, including a manufacturing facility, in Middlebury. 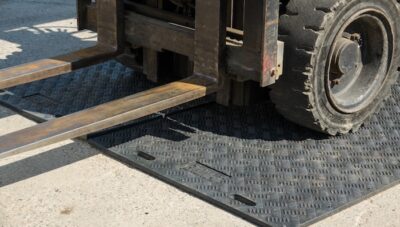 EcoGlobal has developed a manufacturing process that converts landfill-bound, single-use plastic film and flexible packaging into Ekopolimer™ products and applications. Pictured: A forklift drives on an Ekomat

“We’re grateful to the USDA for supporting rural economic development and encouraging American manufacturing,” Caleb Rick, EcoGlobal CEO said in an Aug. 25 statement. “And deeply thankful to the town of Middlebury, Middlebury College, the Addison County Economic Development Corporation, the State of Vermont, and Senator Leahy’s office for their help over several years, consistently demonstrating the benefits of doing business in Vermont.”

EcoGlobal would fit nicely in with Middlebury’s emphasis on a green image for town, gown, and county business development goals.

At present the Chelsea firm imports and distributes Dutch-made ground protection mats (called Ekomats made from the agricultural film).

“If the study finds the project to be feasible and EcoGlobal decides to move forward, the plant will support many local businesses including design, engineering, and construction firms, among others, and the opportunity to collaborate with Middlebury College on climate and circular-economy related research,” according to Fred Kenny of the Addison County Economic Development Corporation.

Meanwhile, ACEDC with EcoGlobal will complete the feasibility study and market analysis of the viability of building and operating their
headquarters and a 2–4-line production facility on rail-accessible land somewhere in Middlebury.

The company’s stated business philosophy is to “utilize plastic waste (don’t burn or bury it), create superior, value-added material, and design high-performance tools which save time and money.”

ACEDC reported that the proposed Ekopolimer facility would create up to 180 new jobs.

“Each production line of the low emissions, low energy process would annually divert over 37,000,000 pounds from the landfill and create significant carbon offsets,” according to ACEDC’s Kenny.

One thought on “EcoGlobal may relocate office, green factory to Middlebury”