About 1 in 8 Vermonters are 9 years old or younger. Excluding non-ambulatory infants and the teenager wannabes who are too cool for school playgrounds, these Vermonters want to know: When will public playgrounds be open again?

Since the lockdown began, Vermont has indeed come a long way. The serious business of childhood play has gotten lost in the shuffle. It’s asking a lot of a kid to not swing, jump or slide. Fifty years later Cat Stevens still asks a good question: “Where will the children play?”

Sunday evening my adult  son treated me to a Father’s Day creemee. Sitting at a picnic table I struck up a conversation with a Barre dad. Like many Vermonters he was impatient with the watching-grass-grow pace of Gov. Phil Scott’s “turn of the spigot.” I asked him what question I should ask the governor at the press conference on Monday. He raised a problem little discussed at the governor’s thrice-weekly press conferences: “Ask him why our playgrounds are still tied up with more wire than an East German border crossing.”

You can hear his frustration. Young kids have two essential jobs: learning and playing. Pandemic restrictions severely limit both. Thanks to germs and slashed budgets, local schools and government are doing less to keep kids active, strong and learning.

On the other hand Barre City playgrounds are “play at your own risk.” The city doesn’t have the staff or budget to clean every slide, swing or jungle gym after each use. The playground isn’t closed, but neither is the grass mowed, and the city swimming pool is a construction site hole in the ground and the whole place looks like it’s gone to seed in more ways than one. Burlington playgrounds are “play at your own risk” too. Although maybe they mow there.

The sprawling, lakeside town of Colchester — so justly proud of its many diverse, beautiful parks — welcomes teens and adults to play tennis, pickleball, etc. But let little ones climb on the playgrounds? Ummm, no, sorry, they’re closed. 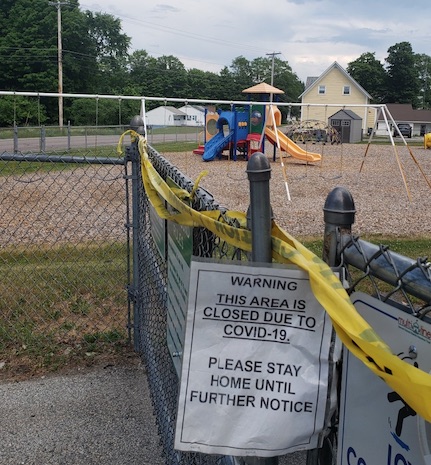 In Brattleboro, the city website says “parks equipment (benches, picnic tables, and playground equipment) remain closed because it is impossible for the Town to ensure that equipment is sanitized in between users.” In addition to the pandemic, that rule may also have something to do with the plethora of homeless people sleeping on and (complainers say) urinating on the park benches. But whatever the reason the effect is the same: no playground for you, kid.

Many municipal websites are simply mum on the subject. To find out you have to call and hope that the answering machine doesn’t just inform you that the parks and recreation staff member you are calling has been furloughed until further notice.

To some parents, it’s an odd regulation. Kids seem impervious to Covid-19 sickness. And no-one is stopping adolescents and millennials from enjoying their new favorite outdoor activity of protesting police brutality at the large mass gathering of their choice. Officials have their reasons, of course. Kids may not get sick but they can presumably transmit the virus. As for the protesters, Scott insists they be allowed to exercise their constitutional rights.

So that’s the background to the press conference question. Here’s how Gov. Scott answered: “We’ll have that discussion. Multiple touch points are significant. They’re hard to clean.” But he added hopefully, “especially during the summer it’s important for our kids.”

Yet at the same press conference, Health Commissioner Mark Levine said the spike of Covid-19 cases in high population states is due to “a breakdown in the willingness” of the public there to abide by basic guidelines. He reiterated the basics: Wear a mask. Wash your hands. If you’re sick, stay home. Stick with the plan. For parents eager for change in the form of opening public playgrounds, that’s not very encouraging news.

The good news is that when school opens this fall, school playgrounds will be open with the following restrictions Education Secretary Dan French emailed Vermont Daily this morning:

Outdoor recess space where students can keep physical distance may be opened. Students may use playground equipment only under the following conditions:

This fall, school playgrounds will be open, at least during school hours. But as anyone who has raised small kids knows, “three months” to them is a fathomless eternity. So their question remains: where will the children play — and when?