There were just under 150 participants, family members and volunteers at the event, with staff making sure that COVID guidelines were followed.

The participants had to make a sled entirely out of cardboard, duct tape, paint, wax and any other material to decorate. Families spent anywhere between two hours and a month making their sleds. Some of the entries were: “A needle,” inspired by the COVID-19 vaccine, “The Dumpster Fire That was 2020,” “Batman,” “The Canines,” “Santa’s Sleigh,” “Feel the Burn,” “Trainwreck,” and “No Diving.” 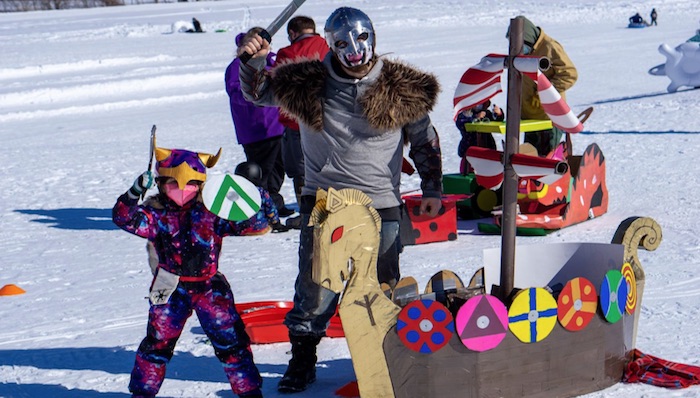 Best spirit went to “Skidbladnir,” the norse ship created by Joanna Lambert and her father, Isaac.

Five sleds at a time made their way to the top of the hill at Hard’Ack Recreation Area, and one by one, they got a push, and their time was recorded by volunteers near the finish line.

The sleds were judged by volunteers from the New England Federal Credit Union. A cash prize was given to the winners for four categories: fastest sled, best design, spirit award, and judge’s choice. Lanyards and medals were given out to all participants that made it down the hill.

The winner for the fastest sled was “The Canines,” by Kiley Baker and Steve Derouchie. The second fastest was the “Gravedigger” and the third fastest went to “The Larssons.” The award for best design went to “Batman.”

Best spirit went to “Skidbladnir,” the norse ship created by Joanna Lambert and her father, Isaac. The family said Isaac was the lead volunteer on the project, while Joanna painted, delegated tasks and demanded more snacks.

Joanna and Isaac had been reading illustrated Norse myths for bedtime stories, so it was clear to them what they were going to make for their sled. It took them a week and a half to complete it. This wasn’t the first sled crafted by the parents and certainly won’t be the last in the annual Duct Tape Derby.

Three winners were chosen for the judge’s choice category: “Arctic Jaws” made by Eva Phillips, “Grave Digger” made by the Trovilles and “Dumpster Fire” made by Owen Hickey and his father Pat.

Some were inspired by hot dogs, Olaf from “Frozen,” a great white shark, a cruise line, a magical foldable ship in Norse mythology, their love for animals, and even Garfield. Most of the families only had one entry, but there were a few families that had multiple entries, which created some interfamily rivalries.

There were kids of all ages sledding down the hill, some of the youngest being only 4 years old.

“I give credit for a 4-year-old for wanting to do this because I wouldn’t be putting my 4-year-old on a hill like this!” said Paul Snyder from Northwest Access TV.

Each sled gets one push from event volunteers or family members at the top and there were spotters on the sides making sure no one got stuck. Some sleds ended up spinning around, going backwards and bumping into the edges, but volunteers had a lot of work on their hands to make sure all of the sleds made their way to the bottom, with only a few tumbles down the hill. Some sleds went down slower than others, but everyone got the chance to pass the finish line.