By Jennifer Kabbany | The College Fix

James Douglas is one of the most prestigious graduates of Middlebury College in the Vermont-based institution’s 222-year history. 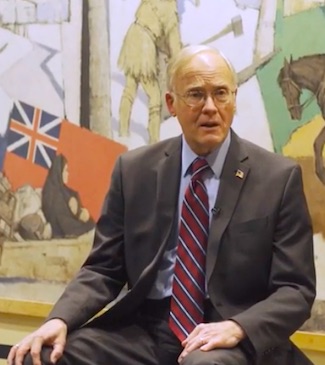 Douglas graduated from Middlebury in 1972. A Republican, he was elected Vermont’s governor in 2002 and served four two-year terms. Prior to that, he served for 12 years as the Green Mountain State’s secretary of state, as well as eight years as its treasurer.

If Middlebury ever bragged on Douglas in the past, it may not have that right anymore: Douglas is sort of disowning his alma mater. His May 19 op-ed for the New York Sun is headlined: “Why I’m Skipping My 50th Reunion at Middlebury College.”

In it, Douglas takes issue with Middlebury’s decision to shun another of the state’s former governors, John Mead, also an alumnus of the college, for its abrupt September 2021 decision to remove Mead’s name from its chapel:

It had been Mead Memorial Chapel for more than a century, since a former Vermont governor, John Mead, donated the funds to construct it on the grounds of his — and my — alma mater. He specified its name, to which the trustees readily agreed. …

Middlebury’s denigration of Governor Mead sullies the reputation of a decent man, as well as a generous benefactor. The September 27 statement portrays him as essentially a precursor of Hitler, rather than presenting him in the context of his time. Support for eugenics was mainstream in the early 20th century, embraced by leaders in society, education and government, including, most likely, the Trustees who gratefully accepted his gift. …

John Mead not only served his state with distinction; he and a group of classmates interrupted their studies to join the Union Army. He appeared in arms at Gettysburg and subsequently returned to complete his degree. He practiced medicine for a while, but his prosperity derived from several manufacturing firms that created prosperity for many families. He was a Middlebury trustee, received an honorary degree, and gave generously to our alma mater, beyond financing the Chapel. …

Nearly everyone’s legacy is mixed. I’ll bet all of us have at some point made a remark or written a comment that, upon reflection, seems inappropriate, even offensive, and that we later regret. Is that the sole basis on which a long and distinguished career should be judged? Under the scrutiny of the Thought Police, no one’s legacy is safe. …

I’ll miss seeing my classmates and reminiscing about our college days. My regret would be greater, however, if I were to pretend that I was happy to be there, in the shadow of Mead Chapel, the scene of the College’s expunction of the Governor’s legacy.

I hope that the institution’s officials reconsider this unfortunate deed. Cancel culture is alive and well at Middlebury, so, for now, I’ll celebrate alone.

In January 2021, it revoked Gov. Rudy Giuliani’s honorary degree. In 2019, administrators abruptly canceled a talk by conservative Polish philosopher and politician Ryszard Legutko several hours before he was set to give his talk. He ended up giving it in secret on campus.

And, most infamously, in 2017 a rowdy crowd of students protested political scientist Charles Murray in a demonstration that left one professor injured and sent to the ER. Professor Allison Stanger had gone to the ER with a neck injury after escorting Murray from campus surrounded by a mob of protesters.