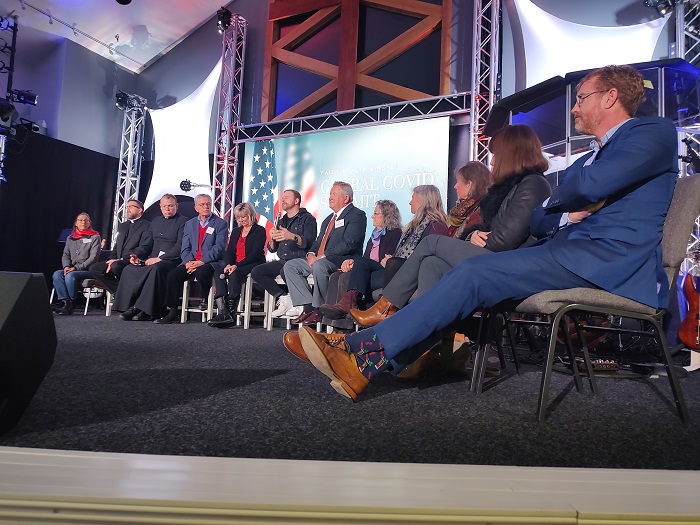 ALTERNATE VOICES SPEAK OUT: A panel of doctors, lawyers and pastors met at Ignite Church in Williston on Saturday to discuss the problems with mainstream COVID narratives and the downsides of government lockdowns and mandates.

WILLISTON, Vt. — About a dozen speakers including doctors, lawyers and pastors shared a stage Saturday at Ignite Church to discuss the populist pushback against COVID-related mandates, such as forced vaccination and continued public masking in some communities.

Looking out at about 200 hundred attendees who came to the “Global COVID Summit,” Dr. Bryan Ardis of Texas shared how his decision to question COVID policies started with the death of his father-in-law at a hospital while undergoing “well-tested and safe protocols.”

After some investigation, Ardis, a doctor concluded that a newly approved antiviral medicine called remdesivir may have caused a dangerous reaction.

“I was watching interviews with doctors from around New York, and they were all saying the same thing, that they’ve never seen a respiratory virus do this when we’ve started treating it,” Ardis said. “We’ve never seen a respiratory virus that’s affecting the lungs, and when we start treating it, [it causes] severe kidney failure on days three, four, and five of treatment.”

He explained that the medicine has been associated in safety studies with kidney failures.

“For three months all I thought about was this damn third day where the doctors called my wife and I to tell us that her dad was going into acute kidney failure, only to find out on day six that it was actually being driven by a drug they were pumping into his veins.

Another featured speaker at the event, Dr. Vicki Wooll, a board member of Independent Doctors of Idaho, focused on what happens historically when nations socialize their medicine. She offered examples from her time studying the failed communist state of Venezuela.

“So they controlled and regulated food, drugs and medicine,” she said. “We are starting to regulate drugs because of the prices already.”

Wooll said Venezuelan officials gained control of the media to control the information people would get.

“They regulated the banks, the telephones, they censored all media,” she said. “For example, they limited the newspapers, and there was a Radio Caracas and it was open almost 60 years, and [former Venezuelan president Hugo] Chavez closed it. Radio was occupied only by Chavez, the internet was semi-censored, social media was totally censored.”

Another doctor, Dr. Peter Breggin, of Ithaca, New York, spoke remotely via a screen on the stage. He told the audience about a concerted effort by those promoting COVID lockdowns and mandates to obtain new government controls over the citizenry. He suggested that patriotic, liberty-minded citizens are the top target of those who promote such policies.

“It’s very clear, they’ve discussed [their political opponents] openly,” he said, adding that those being demonized in society include “people who believe in God, who believe in patriotism, individual and political liberty.”

One lawyer who spoke at the event, Julia Haller, who formerly served as a senior policy advisor to the U.S. Department of Housing and Urban Development and the Department of Homeland Security, said she is seeing a political backlash starting to occur in response to heavy-handed government.

“We can’t forget God gave us love, faith and hope,” she said. “And in Virginia, we just won a very big race, we have a lot of hope. We have [Jason Stuart Miyares] a person with a Cuban background who is also familiar with this playbook — and he’s our attorney general.”

Since being elected in 2021, Miyares has said he will fight new lockdowns from the federal government concerning COVID-19.

Other speakers at the summit included a variety of doctors, lawyers, pastors, and business owners.

The entire event can be viewed online courtesy of Rebirth The Media.