Democratic presidential candidate Bernie Sanders may have previously debunked his own claim that Medicare for All would encourage corporations to raise wages since they won’t have to pay for employee health care.

During Thursday’s Democratic presidential debate, the Vermont senator quarreled with former Vice President Joe Biden over whether his Medicare for All plan would cause wage growth since corporations would no longer have to cover the cost of employee health care. 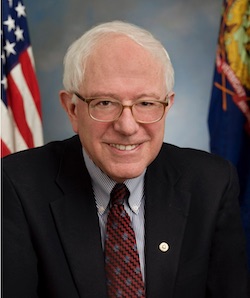 “The president thinks … uh my friend from Vermont thinks that an employer is going to give you back, if you negotiate as a union for all these years, gotten cut wages because you got insurance,” Biden asserted on stage, asking if “They’re going to give back that money?”

“As a matter of fact, they will,” Bernie replied.

Bernie’s assertion suggests that corporate actors, when faced with overhead relief in the form of universal health care, will choose to invest in their workers and raise wages.

However, in a February 2019 op-ed for the New York Times, co-written with Senate Minority Leader Chuck Schumer, Sanders argues against this principle as it applies to the 2017 tax cuts implemented by President Donald Trump and the Congressional GOP.

Sanders and Schumer criticized public corporations for using the money saved from the 19% corporate tax cut to conduct stock buybacks instead of passing the savings on to their employees.

“Fueled by the Trump tax cut, in 2018, United States corporations repurchased more than $1 trillion of their own stock, a staggering figure and the highest amount ever authorized in a single year,” the pair wrote. “This has become an enormous problem for workers and for the long-term strength of the economy,” they added.

They attacked the disproportionate wealth of stockholders, adding “when a company buys back its stock, boosting its value, the benefits go overwhelmingly to shareholders and executives, not workers.”

So, when handed a near 50% cut in total tax burden, corporations chose to buy back their outstanding shares instead of helping workers by increasing pay.

Many corporations, notably Walmart, did in fact raise employee wages in the aftermath of the tax cut. However, if Sanders believes that relieving corporations of cost obligations doesn’t lead to wage growth, there appears to be a serious discrepancy in his argument for Medicare for All as a catalyst for it.

Biden hit Sanders hard on his optimism at the debate, retorting “for a socialist you got a lot more confidence in corporate America than I do.”

Sanders’s campaign did not immediately respond to a request for comment.

3 thoughts on “Did Bernie inadvertently debunk his own assertion on Medicare for All?”