The move by Sen. Diane Feinstein, D-Calif., to derail the Kavanaugh nomination with a last-minute accusation of sexual assault does damage to our society in many ways.

First of all, the accusation, coming as it does at the 11th hour, assaults our sense of fair play and actually hurts women in the long run. People recognize a power play when they see one. Using sexual assault accusations, timed perfectly to derail a scheduled committee vote, increases the chances that women’s testimony about sexual assault in the future will not be take seriously. Crying wolf for political purposes is going to get old very fast with the general public. Either that or no one is going to be safe from a last-minute, unprovable accusation. There is good reason for these words in a traditional marriage ceremony: “Speak now or forever hold your peace.” 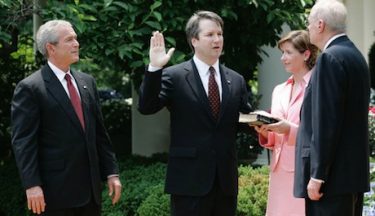 President Bush, on June 1, 2006, attends the swearing-in ceremony for Brett Kavanaugh to the U.S. Court of Appeals for the District of Columbia Circuit.

Secondly, Democrats need to consider the almost certain payback they will face next time a president in their party has an opportunity to make a Supreme Court appointment. Conservatives will adapt the same extreme strategy to derail a nominee that does not meet their political standards.

As this payback process escalates within the two parties, the whole county loses. The criteria for Supreme Court justices should be judicial skill, not political beliefs. As such, we do not get to vote directly for justices. As Sen. Ben Sasse, R-Neb., so eloquently pointed out during the confirmation hearings, debating and voting on policy belong in the legislative branch. Congress has often abdicated its legislative responsibilities, resulting in the Supreme Court hearing and deciding public policy issues best left to the legislative branches. This has led to a dangerous insistence by both parties that Supreme Court nominees have the “right” political philosophy.

Last but not least, consider this: Judge Kavanaugh is a person. Being a conservative white male does not change that. He is a fellow human being with a career, a reputation and a family — and the right to due process in a court of law, not a public show trial. He has worked hard his whole life. He is loved by family and friends. This hurts. If you have ever been attacked in the public light, you know this.

If his nomination is derailed on one person’s unprovable testimony raising doubt about his character, his reputation will be forever tarnished — even if he is later exonerated. In the future, who in their right mind would allow themselves to be nominated for the Supreme Court — or any other high government position — under these circumstances?

Carol Frenier is a business owner living in Chelsea, Vermont, and the chair of the Orange County Republican Committee.

5 thoughts on “Frenier: Derailing the Kavanaugh nomination damages the country”