Susanne Young, a 40-year veteran of public service, was sworn in Tuesday as Vermont’s new attorney general, to the chagrin of multiple groups aligned with the Democratic Party.

Last month Gov. Phil Scott appointed Young, a former secretary of administration and deputy attorney general under William Sorrell, after Attorney General TJ Donovan resigned the office to take a private sector job with the gaming company Roblox. Young will serve through the end of this year.

“There are few with the experience and skillset needed to ensure this important office is stable and fully prepared to help transition to a newly elected attorney general in January,” Scott said on June 22. “Susanne is the embodiment of public service, and it is especially meaningful that she will be the first woman to serve as Vermont’s top law enforcement officer.” 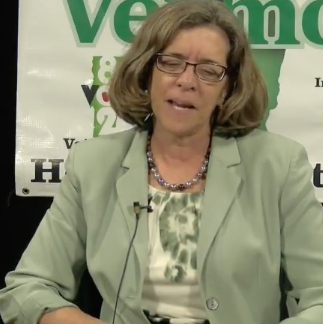 Some political groups aligned with the Democratic Party are unhappy with the governor’s move.

“We are just months away from an AG election in Vermont and Governor Phil Scott is playing politics with the Attorney General’s office,” wrote Sean Rankin of the Democratic Attorneys General Association. “Shame on him for appointing a Republican to take former AG Donovan’s seat. Vermonters overwhelmingly elected a Democrat to the office of Attorney General in 2020, and they deserve to have a Democrat in office for the remainder of AG Donovan’s term.”

Two Democrat candidates running for the office this year in the primary — former Donovan chief of staff Charity Clark and Washington County State’s Attorney Rory Thibault — also criticized the move, as  did the Vermont Democratic Party.

Chief Deputy Attorney General Joshua Diamond, who was expecting to serve as acting attorney general if the governor didn’t make an appointment, spent a couple weeks in the post, and even signed a letter — along with 84 other prosecutors — pledging not to prosecute individuals who run afoul of state anti-abortion laws following the overturning of Roe v. Wade. The gesture was purely symbolic in Vermont, which allows abortion for all nine months of pregnancy.

Young was appreciative of her appointment by the governor and she emphasized her experience in a statement.

“Having worked in the Vermont Attorney General’s Office as a staff attorney and in leadership for 23 years, I am honored and excited to return and serve until the next attorney general takes office,” Young said. “The services provided by the team of talented attorneys and staff, whether it be prosecuting serious crime, protecting consumers and the environment, or advising state officials, are of critical importance to Vermonters and I will work with them to transfer a highly functioning office to a new attorney general in a seamless transition.”

Before Scott’s appointment of Young, Donovan suggested Diamond could be the one to fulfill the duties for the rest of this term. “Diamond is one of the most experienced and well-regarded attorneys in Vermont,” Donovan said.

Other candidates running for the office include Republican H. Brooke Paige and and Progressive Elijah Bergman. Neither has a challenger in the upcoming August primary.

Young was a 1981 Vermont Law School graduate, legal counsel to former Gov. Jim Douglas, and general counsel for the Vermont Department of Corrections and for parts of the Vermont Agency of Human Services. In addition, she was director of the Medicaid Fraud Control Unit and chief of the Criminal Justice Division of the Attorney General’s office.

“This is a great choice by Governor Scott,” the former attorney general said. “Susanne helped me so very much as my deputy AG. I have long thought she is well qualified to be Vermont’s attorney general and I’m confident she’ll do a great job.”

Scott praised Donovan and his team for the handling of the transition.

“I appreciate T.J. for his efforts on behalf of our state and its people. I also want to thank his team for stepping up during this unique transition,” he said. “Their experience and support, combined with Susanne’s extensive experience, will ensure we will be well served by the Attorney General’s office and the next AG will be in an excellent position right out of the gate.”