Editor’s note: This commentary is by Curtis Hier, a 33-year high school teacher from Fair Haven and the president of the Vermont Alliance for the Social Studies.

Our public education system is bipolar. Its reformers are manic, but the test scores are depressed.

The so-called reformers of education have been rapidly and frenetically speaking seemingly forever. TED Talks and TEDx Talks and podcasts and workshops and panels and keynotes and in-service sessions and slide shows. Many, many slide shows. It’s a lot of talking. 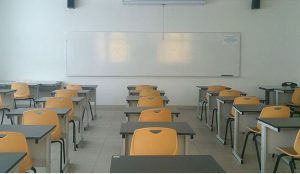 Reformers have been writing rapidly and frenetically, too. As of this writing, an Amazon book search for “education reform” reveals over 20,000 titles. Google provides 272 billion results.  “Scholarly articles” for education reform yields 3.1 million sources.

Seemingly everybody’s been published on the subject, many people with little or no experience teaching children.

When I began teaching, some of the grandest of grandiose ideas were playing out, like open space classrooms. Teachers were finally driven to distraction and erected bookshelves and crates — anything to block out other classes. Dividers went up, and soon rooms were evident.

Whole language was being phased out as the preferred method of teaching reading, but it left me facing a string of high school students over a span of several years who could not spell. Millions of students across the country were victims of the “reading wars.”

Teachers may just laugh. Or cringe. Like a loved one of someone in a manic episode, we’ve been yanked and pulled in many directions.

Albert Einstein said insanity is doing the same thing over and over again and expecting different results.  In this case, it’s our education system changing and remaking itself all the time that is insane.

I’ve seen the pendulum swing from portfolio assessment to standardized tests. George H.W. Bush promised to be the “education president,” and the next three presidents enacted major education legislation — Goals 2000, No Child Left Behind, Race to the Top, and Every Student Succeeds — built around standardized testing.

Just what we needed: politicians getting in the education reform game.

Then there’s the spending — wild spending. Our country is devoting some $680 billion to public schools. That’s twice what we did 30 years ago. Much of that goes to an ever-expanding education bureaucracy. New York leads the nation in spending over $20,000 per student. That doesn’t include capital expenditures.

Philanthropists are scattering their money at our schools. Bill Gates has spent in the billions. A RAND report on a $1-billion seven-year Gates initiative found that it did little to help students.  Facebook founder Mark Zuckerberg famously threw $100 million at Cory Booker and his unruly Newark public school system.  Of that, $20 million went to consultants who did little to actually help students.

Our education technology addiction is costing us $11 billion a year. Over $8 billion is spent on software, much of which isn’t even used. Zuckerberg is backing a personalized learning platform known as Summit Learning, which is overexposing our students to screen time, as if they needed that.

How have the results of all this activity been? Awfully depressing. On the most recent National Assessment of Educational Progress (NAEP), only one third of eighth-graders are at proficiency level or above in mathematics. One third are at proficiency or above in reading — a decline from the previous assessment. Additionally, the achievement gap is not budging. Study after study is showing that technology does not boost meaningful student outcomes. It may stimulate “engagement” at times, but that’s not the same as achievement. Our results are sluggish.

So what would I prescribe for our public school system? Easy. Attract good teachers, then let them do their jobs. That’s the sane thing to do.

12 thoughts on “Curtis Hier: Attract good teachers and let them do their jobs”