When Sebastian Arcos and family members tried to travel from Cuba to the United States, authorities stopped them in what turned out to be a sting operation to arrest one of his uncles, who had advocated and fought for Fidel Castro’s revolution more than 20 years earlier.

His uncle spent seven years in jail. His father, also a political supporter of the communist revolution and like many other citizens soured on the broken promises of democracy, was imprisoned for six years.

“For the sake of argument, let’s say both the [Cuban] health care system and education system are perfect, which they are not. There have been thousands of political executions, tens of thousands of political prisoners, and 3 million Cuban exiles,” said Arcos, 58, today associate director of the Cuban Research Institute at Florida International University.

“So, the question to ask when we are told to consider the good things is: What is the price for the good?” Arcos told The Daily Signal.

Arcos said that he is “surprised when talking heads in the United States will give Fidel Castro the benefit of the doubt.”

Sen. Bernie Sanders, I-Vt., a professed democratic socialist, has defended comments he made in the 1980s, when he said of Castro: “He educated their kids, gave them health care, totally transformed the society.”

In defending those remarks during an interview that aired Sunday on CBS’ “60 Minutes,” Sanders said:

We’re very opposed to the authoritarian nature of Cuba, but you know, it’s unfair to simply say everything is bad. You know? When Fidel Castro came into office [in 1959], you know what he did? He had a massive literacy program. Is that a bad thing? Even though Fidel Castro did it?”

Bernie Sanders defends his 1980s comments about Fidel Castro in an interview on 60 Minutes. https://t.co/ySqvQKoiBU pic.twitter.com/lTwuXWp9sA

Castro handed control of the government to his brother, Raúl Castro, before his death at age 90 in November 2016.

Miguel Díaz-Canel was named president when the younger Castro stepped down at age 87 in February 2018, but is largely considered a figurehead. Raúl Castro, head of Cuba’s Communist Party, is said to make major government decisions.

He said people should know better than to concede gross human rights abuses in Cuba, and then point to health care and literacy.

“That’s been the regime’s argument for decades,” Arcos said. “Whoever makes that argument is just repeating their lines.” 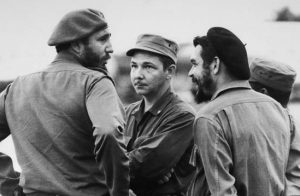 The Heritage Foundation’s 2019 Index of Economic Freedom ranks Cuba at 178th among the world’s nations based on how free its economy is.

Cuba did adopt some free market policies about a decade ago, but the government hasn’t been a strong effort to implement the reforms. Private property is allowed, but is strictly regulated by the government.

According to Heritage’s index, low state-dictated wages increase poverty in Cuba. The state runs the means of production, property seizures without due process are common, and the top income tax rate is 50%.

Repression in Cuba is on the rise, said Janisset Rivero, 50, a human rights activist who lived in Cuba until age 14. Her family was wrongly accused of engaging in seditious speech against the Cuban government because they received a letter from family abroad.

“Health care and education are not as good as the propaganda claims,” Rivero said. “It’s indoctrination more than education. The Cuban system doesn’t tolerate critical thinking.”

They said the health care system has two tiers: One is for tourists, elites, and the military, which is top rate and what people see. The other is for the general population. When Cubans go to those hospitals, they have to bring their own food, water, bed sheets, and pillows.

Of support inside the United States for Cuba’s communist system, Rivero said, “It’s ignorance. Some people are ignorant.”

However, she suspects that in some cases, it’s worse.

“Some people simply support socialism and communism with a big state that can take control of people’s lives,” Rivero said. “Some supporters know exactly what is going on in Cuba and believe it would be OK here because they believe they know best.”

Frank Calzon, who retired last year as executive director of the Center for a Free Cuba, was born in 1944. His parents sent him to the United States after the Castro-led revolution. He became active in human rights causes and led the center for 22 years.

“A lot of claims the Cuban government makes should be suspect,” Calzon said. “Cuban students are not really more educated now. In 1951, the country had 75-80% of students [who] knew how to read and write.”

A strong spirit exists in Cuba for freedom, he said, pointing to the group Ladies in White as one example.

“The Ladies in White is a group of mothers, wives, sisters, and daughters of political prisoners,” Calzon said. “They try to march to Mass on Sundays, but Cuban police intercept them and take them to prisons. They release them that evening, but they take them several miles out of their city.”

6 thoughts on “Cuban Americans tell what life under Castro was really like, despite Bernie’s praise”