S.265, the criminal threatening bill, passed the Vermont House on Tuesday, but not without verbal pushback from two Republican lawmakers.

The bill doubles the maximum prison sentence from one year to two years for criminal threatening if the threatened person is a political candidate, elected official, or government employee (among other protected categories). It passed 89-32. 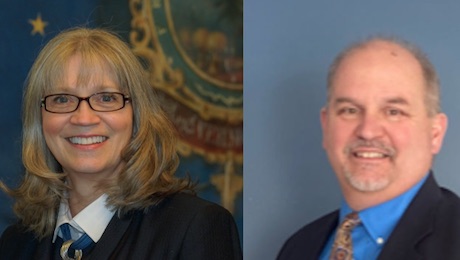 Due to changes in the House version, it now goes back to the Senate for reconciliation. It was sponsored by senators concerned about possible aggression against lawmakers and other public officials.

“I believe in and support the good intentions of this bill but I cannot vote to make myself more equal – even if just a little more equal – than my neighbors,” Rep. Matthew Walker (R-Swanton) said in explanation of his ‘no’ vote.

In George Orwell’s classic political satire Animal Farm, politically powerful farm animals explain their claim to special privileges by telling the other barnyard animals, “All animals are equal – but some are more equal than others.”

Rep. Pattie McCoy (R-Poultney) explained her no vote as follows: “A carve out to somehow hold ourselves above an existing law that already protects everyone, is something I cannot support.”

At least one legislator spoke in support of added protections for lawmakers. Rep. Barbara Rachelson of Burlington said: “Threats against State employees, elected officials, election workers, and others have increased in Vermont. These threats go against Vermont values and result in keeping people from serving or working, or drive people to stop serving or working. We’ve sadly already seen that happen right here in our Chamber. I voted yes to strongly send a message that this behavior is not okay and will not be tolerated.”