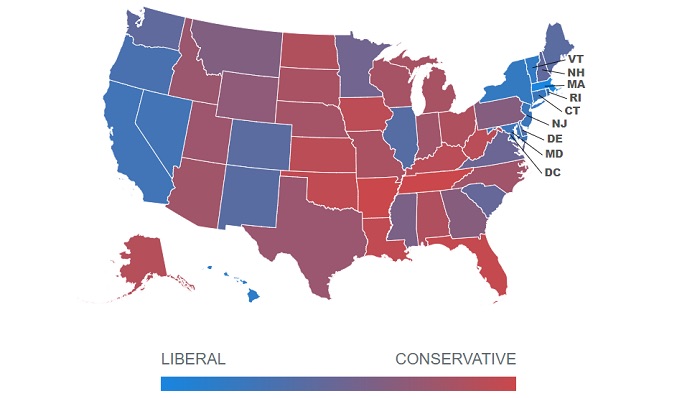 As for numbers, New Hampshire ranked 31st. Better than most, with room for improvement, but excellent given our proximity to Connecticut (41), Vermont (47th), Rhode Island (48), and Massachusetts (50).

I’m not sure what CPAC means by conservative policy, but this list was built based on how state legislators voted, and it looks like it hews closely to how the New Hampshire House Republican Alliance rates reps. I’d call that a decent measuring stick.

I know it’s CPAC, it should be conservative, but you can’t trust anything to be conservative just because it is in their name. RINOs have hijacked the badge for years, making it almost unusable. But this seems legitimate.

As for numbers, New Hampshire ranked 31st. Better than most, with room for improvement, but excellent given our proximity to Connecticut (41), Vermont (47th), Rhode Island (48), and Massachusetts (50).

The bluest of blue Massachusetts is just across our southern border and Vermont – which is working hard to beat the Bay State, a close 47th.

And the votes make all the difference. New Hampshire’s top 50 CPAC featured reps for 2021 (House or Senate), all rated at 97% or better, with thirteen earning 100%.

Massachusetts? One ranked 94%, one at 90%, and it’s downhill from after that; the bigger problem is so many Democrats and so few Republicans of any sort.

And what about all those other states? Who were the best and worst?

The top five most conservative legislatures were:

The bottom five were:

New Hampshire is bordered by the 47th and 50th most liberal legislatures in America, according to CPAC. It makes it much harder for us to protect the New Hampshire advantage because Liberals looking to escape these places may come here thinking they can still vote for Democrats and New Hampshire won’t be affected.

History tells a different tale. Every time the Democrats get a majority in our state, they grossly overestimate revenue so they can spend more now, then announce (when we fail to reach those inflated estimates, that we need new or higher taxes or “they will have to cut essential services.”

Rolling-back spending or expansions of government are rare. New Hampshire did it in 2011-2012 when Bill O’Brien was Speaker, but it’s an uncommon accomplishment. The secret is to keep it limited or controlled – in check – every legislature, every vote, and only taxpayers can do that.

Massachusetts and Vermont pulled the same song and dance as the NH Dems but nothing ever got rolled back. Democrats took control and kept spending—building government-dependent constituencies with tax dollars. Before too long, there was no going back, and Maine is headed the way of Vermont (which used to be very conservative not all that long ago) if they are not careful.

Maine, by the way, ranked 35th in CPACs 2021 survey, so New Hampshire needs to watch how it votes as well. Every election, every ballot, every seat.