MONTPELIER — The state of Vermont is changing its fleet over to electric vehicles and hybrids, but little is known about how much it will cost taxpayers, or how the vehicles will perform in New England’s cold climate.

On Wednesday, Harmony Wilder and Chris Cole, respectively the fleet manager and commissioner of the Department of Buildings and General Services, appeared before the Senate Transportation Committee to report how the adoption of new state vehicles is progressing.

The fleet’s transformation is a mandate in the FY 2020 transportation bill, which requires that at least 50 percent of vehicles purchased or leased by the department must be plug-in electric (EV) or gas-electric hybrids. Beginning July 1, 2021, the quota for electrification of the fleet rises to 75 percent. 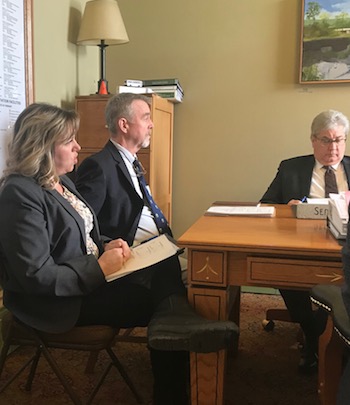 MORE STATE EVs: From left to right, Harmony Wilder and Chris Cole, respectively the fleet manager and commissioner of the Department of Buildings and General Services, discuss electrification of the state fleet with members of the Senate Committee on Transportation.

Wilder told senators the BGS Fleet Management Services has purchased and accepted delivery of 17 non-hybrid vehicles and 40 hybrid vehicles in fiscal year 2020. This order breaks down as 30 percent non-hybrid (conventional gas/diesel) and 70 percent hybrid or electric.

Wilder said replacements increasingly will be electric or hybrids.

“Pretty much we’re sticking with if there is a hybrid or EV model available, that is what you get,” she said.

Some of the larger EV models are still too expensive for adoption.

“There is a minivan — however the price is astronomical,” Wilder said. “We think we can make our targets well above and exceed our targets without having to include the minivans yet. The Dodge 1500 has a mild hybrid and we’re looking into those as well.”

Sen. Tim Ashe, D/P-Chittenden and vice chair of the committee, a hybrid owner himself, told True North that the law allows some leeway when it comes to adopting larger vehicles.

“It provided flexibility to the agencies and to the commissioner of Buildings and General Services, knowing that for some activities, if they need a pick-up truck and there’s not a hybrid or electric model, you can’t force that issue,” he said.

All EV models continue to rely on federal and state subsidies. The federal government provides a tax credit of up to $7,500 for new EV purchases. Vermont is chipping in $1.1 million from its budget to help subsidize the electric vehicles.

Despite these subsidies, the retail price for most EVs still ranges from $30,000 and up. Some high-end models are over six figures.

Sen. Dick Mazza, D-Grand Isle, the chair of the committee, told True North the total cost impact of this transition for taxpayers is still being assessed. For now, there are no hard figures.

“We want to make sure that it’s cost-effective, but more importantly we want to protect the environment and try to switch as many as we can,” he said.

Sen. James McNeil, R-Rutland, the only Republican on the committee, said he’s confident the state will reap financial benefits from EV adoption.

Cole and Wilder said details of those savings won’t be available until the vehicles are out on the road.

“We won’t know until we start actually having them in the fleet and we can track their fuel economy,” Wilder said.

“We’ll know better a year from now the total operational costs, including purchase-cost and the costs to operate it for a year,” he said.

EV performance, especially in the cold Vermont climate, continues to be a concern. Cole, who drives a hybrid, told committee members his model relies more on the battery and less on gas than some other models. He said the cold temperatures have not been good for the battery and the vehicle’s range.

“I’m getting less in the winter — a full-third less capacity,” he said. ” … So I asked them about all the other vehicles that they sold and they said, ‘Yeah, we have a bunch of dissatisfied customers.'”

Cole also noted that charging stations are not always an easy find for EV drivers, which is why hybrids continue to sell better than full electric vehicles.

“This is potentially why we are seeing more hybrid vehicles than plug-in hybrid vehicles, because if you don’t have a place to plug it in at work and keep your fleet vehicle going, you are not going to purchase it,” he said.

EVs continue to experience strong opposition in the political landscape, especially from conservatives. On Wednesday, gubernatorial candidate John Klar penned an op-ed for the American Thinker that pointed out how electric cars rely on carbon-based energy.

“Even if they focus on forcing electrification of private cars, where does the real power come from every night when most of them plug in to re-charge?” he wrote. “If it is a still night, zero electricity will be coming from wind and solar. That leaves coal, gas, batteries, pumped-hydro, rationing, load-shedding or blackouts to close the gap.”