Lt. Robert Cattani of the Midtown South Precinct told the department “the cop in me wants to kick my own ass,” in an email obtained by The Post on June 3. Cattani said he lost sleep over the “horrible decision to give into a crowd of protesters’ demands.”

“The conditions prior to the decision to take a knee were very difficult as we were put center stage with the entire crowd chanting,” Cattani said, according to The Post. “I know I made the wrong decision. We didn’t know how the protesters would have reacted if we didn’t and were attempting to reduce any extra violence.”

Nationwide protests followed George Floyd’s death on May 25 after a Minneapolis police officer knelt on his neck for nearly nine minutes, video showed. Cattani and at least four other cops complied with protesters’ chants “NYPD, take a knee,” on May 31 at a protest in lower Manhattan’s Foley Square, The Post reported. 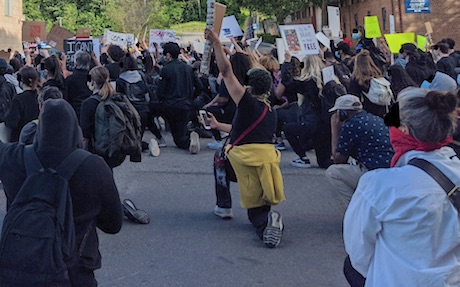 Black Lives Matter protest leaders routinely command others to kneel to show solidarity with the movement.

“I thought maybe that one protester/rioter who saw it would later think twice about fighting or hurting a cop,” Cattani said, The Post reported. “I was wrong. At least that [sic] what I told myself when we made that bad decision. I know that it was wrong and something I will be shamed and humiliated about for the rest of my life.”

Police sources questioned Cattani’s actions, but said they were relieved he apologized to the department, The Post reported. “I’m glad he took it back, because your officers are out here battling with these guys and that’s what you do to show appreciation? Never show your weakness,” an unnamed police source told The Post. “You did it to appease these people who didn’t appreciate you anyway.”

“I spent the first part of my career thriving to build a reputation of a good cop, I threw that all in the garbage on Sunday,” Cattani’s email said, The Post reported. Though he regrets kneeling at the protest, Cattani condemned former officer Derek Chauvin, the officer charged with Floyd’s death.

“We all know that asshole in Minneapolis was wrong. Yet we don’t concede for other officers’ mistakes. I do not place blame on anyone other than myself for not standing my ground,” Cattani said.

Seven cops were injured and around 250 protesters were arrested in New York City from May 31 to June 1, the NYPD reported.

The NYPD, Shea and de Blasio did not respond to the Daily Caller News Foundation’s request for comment.

The president of the Chicago Fraternal Order of Police said Thursday he will not tolerate officers kneeling with George Floyd protesters.

President John Catanzara of the FOP said police officers who kneel with protesters will “be risking basically being brought up on charges and thrown out of the lodge,” he told Fox 32 news Thursday.

Catanzara was installed president last month, according to the New York Post.

Police have been widely criticized in general since George Floyd died in police custody after former Minneapolis police officer Derek Chauvin knelt on his neck for nearly nine minutes. Since Floyd’s death, many have called to defund and abolish the police altogether.

“Specifically, this weekend, this was about defunding and abolishing the police department. And you’re going to take a knee for that? It’s ridiculous,” Catanzara said.

Chicago Mayor Lori Lightfoot was critical of Catanzara’s comments, according to Fox 32.

“I don’t really think that we should credit those kinds of really unfortunate comments, and I’m not going to dignity them with any further response,” Lightfoot responded. Lightfoot is part of the United States Conference of Mayors, who have been recently calling for police reform.

Now is the time to act on licensing for police officers once and for all. pic.twitter.com/GmNrpLiwxk

Catanzara was criticized in 2017 for posting a picture in uniform of his support for now President Donald Trump, the New York Post reported, citing Fox 35. The FOP did not respond to the the Daily Caller News Foundation in time for publication.