There is no known, specific threat of armed protest at the Vermont State House

“At this stage there is not a specific threat or set of threats specific to Vermont,” Schirling said. “But at this stage it’s early in the process.” Just a few minutes later, it was reported to Schirling and the reporters on the Zoom call that the FBI had just issued a statement confirming all 50 states should expect armed gatherings at their state houses. 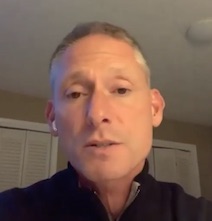 Protesters may carry firearms, but are advised to consider whether it’s wise to do so

“If people are peacefully carrying a weapon it’s not an issue,” Schirling said. “It’s when it’s brandished that it obviously is.”

Still, Schirling appealed to protesters to think twice before bringing a firearm. “I don’t think it’s an unreasonable general request. I don’t want to be overly proscriptive. I would urge folks to consider what’s prudent.”

Even on weekdays the State House is virtually empty, but on Sunday Jan. 17 it will be especially so. Schirling said police will take that fact into account as it prepares its defensive posture for any gathering.

Schirling said that while he’s not aware of every Vermonter who rode the Trump bus to and from the Jan. 6 rally, he’s unaware if any of the 50-plus riders associated with right-wing militia groups.

“I don’t want to speculate on anything of that sort,” Schirling said. “Ultimately that would be the governor’s call. I think it would be a stretch for something like that to happen.”

A reporter asked Schirling if gun and ammunition sales have spiked since the riot last Wednesday. The commissioner said he’s not aware of any. Over the last year “it’s been a theme.” Schirling is correct: Vermont firearm sales last year exceeded 50,000 for first time since federal recordkeeping began in 1998. The annual total was 57,965. It’s not uncommon for sales to spike when an incoming administration is believed to be more restrictive about gun and ammunition sales, he said.

Noting that many lawmakers and state officials work from their homes, a reporter asked if they  have been trained to deal with protesters. Schirling said they have been given some training, and “In the days to come we do anticipate doing a briefing for the legislators.”

21 thoughts on “Cooperating with martial law ‘would be the governor’s call,’ top cop says”