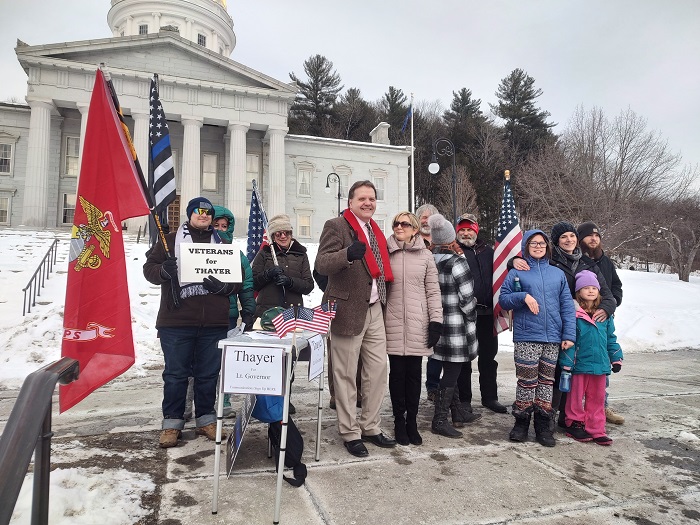 READY TO RUN: Gregory Thayer (red scarf at center) of Rutland has toured the state to speak with Vermonters about critical race theory via his Vermonters for Vermont Initiative, and now he is running for lieutenant governor.

“Today I’m here to announce my candidacy for the lieutenant governor position on the Republican ticket primary ballot,” Thayer, a liberty-minded resident of Rutland, said to supporters on the Statehouse steps amid zero-degree temperatures.

“The people who are occupying this building — Progressives and Democrats — are not our friends. They do not represent the best interest of you and your family,” he said, adding that many Vermont politicians work “for the agenda of special interests, big money and control.”

Thayer, an accountant, has never held office in state government — a fact that may be attractive to many voters. His experience in politics includes running the Vermonters for Vermont Initiative, which had him touring the state to speak with people about controversial subjects such as critical race theory in schools. He said if elected he will make similar public dialogues a weekly event.

Thayer’s resume also includes serving as an alderman on Rutland City Council, and as chair of the Rutland City Republican Party. In all, he’s been involved in politics for about 25 years.

One issue he is running on is standing with police to fight crime.

“Crime is out of control in Vermont,” Thayer said. “Government’s biggest responsibility is protecting its citizens, protecting its people. And the Progressives, the people in this building, they are not doing that. … I will fight for the police and stand up for law enforcement and give every tool and opportunity to do their job the most efficiently and effectively as they can.”

He also blasted the teaching of critical race theory in schools.

“As I touched on about critical race theory, indoctrination going on in the various schools around our state has got to stop. Parents did not sign their children over to the government schools. Parents have a responsibility and a right to be involved in the curricula of their schools and what their children are being taught and we need to honor that,” Thayer said.

He added that he stands for teaching about state and federal constitutions, and said schools should not politicize history courses.

On the Republican side, Thayer will be running against state Sen. Joe Benning, R-Caledonia, a moderate and the Senate’s former minority leader. Democrats who have announced candidacy for lieutenant governor include state Rep. Charlie Kimbell, D-Woodstock, and Vermont Council on Foreign Affairs Executive Director Patricia Preston.

According to VTDigger, former Lt. Govs. David Zuckerman and Doug Racine are also weighing a run for the office, which is opening following incumbent Lt. Gov. Molly Gray vacating the seat to run for U.S. House.

Thayer spoke out on Proposal 5, a controversial proposed constitutional amendment that would guarantee abortion rights up to the moment of birth.

“It’s a horrible and filthy piece of legislation,” he said. “It’s being pushed by special interests and we need to stop it. Vermont is not a state for abortion, pedophilia, prostitution. Or the biggest one that gets me is a 5-year-old boy could go into his doctors or his school and say ‘I want to be a female,’ and under this article, if it gets adopted by the people in November, he could do that and the parents have no rights.”

On the state’s COVID-19 policies, Thayer said while the coronavirus is a public health threat to be taken seriously, he does not support mandating people’s behaviors.

“I think it’s been blown up a lot, I really do,” he said. “It’s sad that we’ve lost so many great Americans and so many beautiful Vermonters, but I think some things will come out over the years — different ways that we could have treated and taken care of this.

“But I don’t support mandates. I led the charge in Rutland not to have mandates when the Legislature was doing that. I think it’s a personal responsibility.”

On running against Benning, he said, “You know I’m a brutal truth guy and I would set myself apart from Mr. Benning in that I would have worked harder for my principals, and the principals of the Republican Party.”