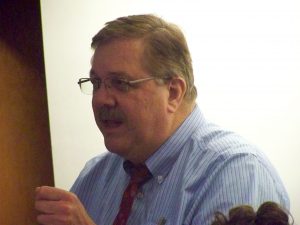 Secretary of State Jim Condos: “The public has a right to know. Open meeting and public records laws protect our direct access to the decisions that affect us. Understanding the laws makes everyone a better citizen.”

While some may view Secretary of State Jim Condos as playing politics when it comes to the White House’s Presidential Advisory Commission on Election Integrity, he nevertheless is a tireless spokesman for the often elusive ideals of government transparency and accountability.

This fall, Condos is making the state rounds with his 2017 “Got Transparency?” tour. Condos has made his transparency roadshow regular happening since 2011.

Last week, Condos appeared in Addison County at Ilsley Public Library in downtown Middlebury to talk with elected officials and the public about the “do’s and don’ts” of open meeting law and public records.

“In Vermont, town officials must (first) adopt a resolution setting the time and place for a regular meeting,” Condos said of the meeting law. “They have to post and make an agenda available 48 hours before each meeting.”

“When it comes to special meetings, they must give 24 hours’ notice to newspapers or radio stations serving the area, any person who specifically asked (about the meeting) in writing, and all members of the public body. An agenda (then) has to be posted 24 hours in advance.”

Vermont’s Office of the Secretary of State is responsible for several statewide functions including campaign and election integrity as well as riding herd over the state’s local open-government laws.

In his presentation, Condos outlined in prosaic detail Vermont’s right to know statutes, which encompass public meetings such as select boards and zoning boards. He also explained how to access public records of interest to the press and other members of the public.

When it comes to government executive sessions, Condos indicated that many public officials need to be informed before ever shutting the door on the public and members of the press.

“Yes, there are some permissible reasons to go into executive session,” he said.

What are those reasons? Condos said valid reasons include circumstances such as contract discussions and labor agreements with municipal employees, arbitration and mediation, non-tax related grievances, pending civil litigation or prosecution, and confidential attorney-client communications. Otherwise, there is no justification for a closed-door meeting.

“A municipal board can meet in private when negotiating real estate purchase options,” he said. Other reasons he cited include appointing or disciplining a public officer or employee, imminent peril to public safety, and emergency response measures.

Not all Vermonters see Condos as transparent, especially when it comes to his opposition to a federal election integrity commission. Condos recently called President Donald Trump’s executive order establishing the election commission as “a waste of tax payer money” and “a nefarious scheme designed to instill fear in American voters through baseless claims of widespread voter fraud.”

Moreover, Condos, writing in a Sept. 27 commentary, appeared to defend the prerogative of second-home owners with primary residence in other states to vote in Vermont elections so long as they intend to move to Vermont in the near future. However, he also stated he would “never suggest” that the language in the state’s residency definition “means second home owners in Vermont may register to vote here.”

“Any person may ask to inspect or copy a public record,” he said. “And as stated in (the 2010 case of) Shlansky versus the City of Burlington Police Department, ‘the identity and motive of the requestor cannot be considered when weighing access to public documents.'”

Condos said that the Secretary of State’s office is currently conducting an access to public records survey to better understand if the public and press are being served in information requests.

“The public has a right to know,” he said. “Open meeting and public records laws protect our direct access to the decisions that affect us. Understanding the laws makes everyone a better citizen.”

CORRECTION: This story was updated at 5:08 p.m. Nov. 14 after Secretary of State Condos contacted TNR to say he disagreed with the sentence in the original story that said he “has vigorously defended the prerogative of second-home owners with primary residence in other states to vote in Vermont elections.” That paragraph has been modified.

Images courtesy of state of Vermont and Lou Varricchio/TNR