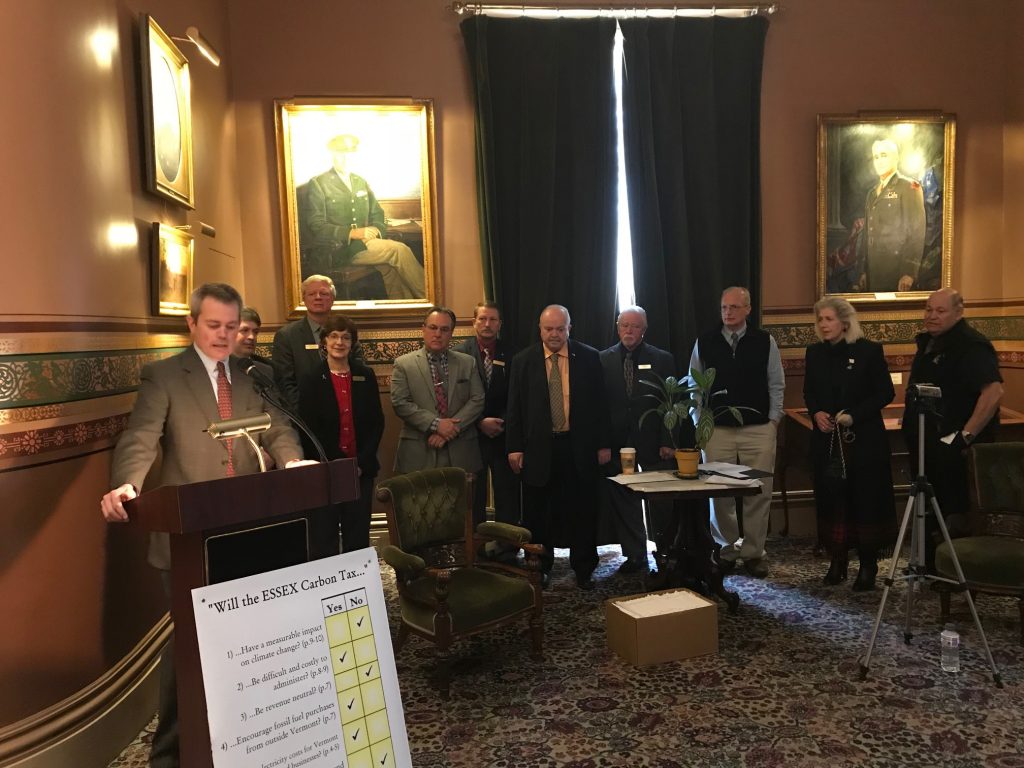 MONTPELIER, Vt. — The Ethan Allen Institute has heard enough about the bold claims of proponents of the ESSEX carbon tax plan, which raises the cost of gasoline, heating fuel, propane and natural gas and subsidizes green-energy alternatives.

The free-market think tank recently hired economist and former policy director for the Vermont Department of Public Service, Dr. Jonathan Lesser, to crunch numbers and see what economic impact the tax would have on the state.

On Wednesday morning, speaking in the Cedar Creek room at the Statehouse, EAI President Rob Roper presented the report’s findings and criticized lawmakers who put forth carbon tax bills year after year.

“Since 2014, advocates of a carbon tax have been obsessed with artificially driving up the cost of fossil fuel and have put forward seven different legislative concepts,” Roper said. “None were popular with Vermonters, and for good reasons. At this point, they are throwing everything at the wall in hopes that something, anything will stick.”

Over an eight-year period, the tax would add an additional 40 cents to each gallon of home heating fuel and diesel, 32 cents to a gallon of gasoline, and 24 cents per gallon for natural gas and propane.

“Half of the revenue gathered from this tax on people driving to work, heating their homes, etc., will be used to generally subsidize electric rates, and the other half would be split between rebate payments to low income and rural Vermonters,” Roper said.

Proponents of the tax plan praise it as the way to tackle man-made climate change and spur the economy via new green jobs and infrastructure.

“As a one-time Vermonter deeply involved in the state’s energy planning, I believe that the Essex Plan has so many unsupportable and just plain wrong economic assumptions that enacting it would serve Vermonters very poorly,” Lesser said.

“It would achieve virtually nothing beyond a sizeable wealth transfer, it would cast a dark shadow over Vermont’s economy, and of course it would produce no detectable effect on climate change.”

Lesser’s analysis does not anticipate a reduction in carbon-based fuel use, and in some cases it concludes that a carbon tax may create incentives for further use of such fuels. Also, it finds that a reduction in electric utility rates is an unlikely scenario — a more likely case is rates will rise.

“The ESSEX carbon tax would be an overall drag on the state’s economy,” Roper said. “[It] will not be revenue neutral if only because the cost to implement it will be such a complicated scheme … and the money to administer the tax will have to come from somewhere, The ESSEX carbon tax will be disproportionately punishing to low-income Vermonters and will have no measurable impact on climate change.”

During a question and answer session, Roper said there would be an incentive for Vermonters and even shipping companies to avoid the tax if the state goes it alone. “People will cross over into New Hampshire to have their fuel oil delivered by a New Hampshire company that’s not subject to the tax.”

“There will be plenty of opportunities for what they call ‘leakage,’ which is the technical term Dr. Lesser uses for people who avoid the tax,” he said.

Roper also argued that while a portion of the tax proceeds would subsidize low-income ratepayers, the portion that would go toward subsidizing electric vehicles and electric heat pumps will mean the wealthy will be the ones who enjoy the subsidy.

“If you can’t afford to buy those things, you are stuck subsidizing the wealthy people who can afford them,” Roper said.

The most affordable electric cars, before subsidies kick in, are around $25,000-to-$30,000, while high-end EVs get near six figures.

Vermont is not the first place to consider the carbon tax. Australia imposed and later repealed its tax on carbon emissions in 2014. At the time, Australian Prime Minister Tony Abbott conceded the scheme brought harm to the country.

“Today, the tax that you voted to get rid of is finally gone: a useless, destructive tax which damaged jobs, which hurt families’ cost of living and which didn’t actually help the environment,” Abbott told reporters.