The Senate voted to begin debate Monday evening on President Donald Trump’s framework for immigration reform, which would grant amnesty to 1.8 million illegal immigrants in exchange for new priorities for legal immigration and more border security, including the president’s promised border wall.

“Whoever gets to 60 wins,” McConnell said at a press conference Feb. 6, referring to the number of votes required in the 100-member Senate to proceed to a floor vote on a measure. 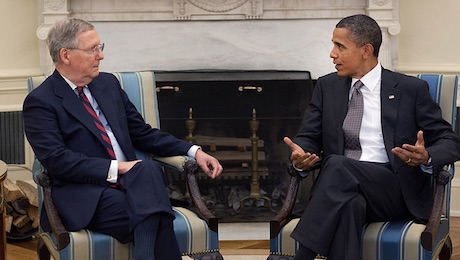 The 1.8 million illegal immigrants who would get amnesty is more than double the estimated 800,000 illegal immigrants brought to the country as minors who signed up to be protected from deportation under President Barack Obama’s 2012 Deferred Action for Childhood Arrivals program.

In saying so, McConnell signaled the Senate would use a procedure called unanimous consent, in which all members must agree to bring up specific amendments for debate and 60 votes are required to avoid a filibuster blocking a floor vote.

Republicans have 51 seats in the Senate, Democrats have 47, and two independents caucus with the Democrats.

McConnell planned to use an unrelated bill passed by the House as a shell to allow for debate and members’ ability to introduce whole new bills as amendments, a process that is rare but has been followed in the past.

Sen. Tom Cotton, R-Ark., and six other Republican senators introduced a bill Monday to allocate $25 billion for border security measures, including radar, physical and virtual fencing, and other technologies.

Trump previously put a price tag of $25 billion on a wall along the U.S.-Mexico border.

The Cotton bill also would restrict family-based immigration to the nuclear family, budget for increased border security personnel, and close what sponsors call loopholes in the immigration process.

The six other Republican senators whose names are on the Cotton bill are Chuck Grassley of Iowa, John Cornyn of Texas, Thom Tillis of North Carolina, David Perdue of Georgia, James Lankford of Oklahoma, and Joni Ernst of Iowa.

The legislation “grandfathers all pending family-based visa applications in order to reward those who chose to follow the law and immigrate legally,” according to a press release from Cotton’s office. “The allotment for the Diversity Visa lottery will be reallocated to reduce this backlog and the employment-based visa backlog.”

The Diversity Visa is a controversial lottery program that issues green cards granting legal permanent residence in the U.S. to 50,000 immigrants each year, as described in a recent commentary by David Inserra, a policy analyst at The Heritage Foundation.

The 1.8 million illegal immigrants who would get amnesty under the Cotton and Trump plans is more than double the estimated 800,000 illegal immigrants brought to the country as minors who signed up to be protected from deportation under President Barack Obama’s 2012 Deferred Action for Childhood Arrivals program. DACA is set to expire March 5, by Trump’s order.

Many of their advocates call this segment of the illegal population “Dreamers” and generalize that they are positive contributors to American life.

Hans von Spakovsky, a senior legal fellow at The Heritage Foundation, told The Daily Signal in an email that the Cotton bill mirrors the Trump plan and is detrimental to the country.

“The problem with this proposal is that providing amnesty and citizenship to 1.8 million illegal aliens will simply act as a magnet to attract even more illegal aliens—just like the 1986 amnesty did,” von Spakovsky said, adding:

Another proposal, spearheaded by senators of both parties in what they call a “Common Sense Caucus,” including Sen. Susan Collins, R-Maine, would authorize $25 billion in wall funding and end the Diversity Visa Lottery, according to NPR.

Mark Krikorian, executive director of the Center for Immigration Studies, said the amnesty component of the Cotton bill is not justifiable.

“The amnesty goes way beyond people who already have DACA, and in fact, it used the DACA standards to amnesty a million extra people; specifically it accepts the idea of arrival before age 16 as the age cutoff,” Krikorian said. “I don’t think there is any justification for that.”

Sens. Dick Durbin, D-Ill., and Lindsey Graham, R-S.C., have floated yet another proposal that would allow a pathway to citizenship for DACA recipients and allocate $2.71 billion for border security, far less than needed to build a wall.

White House press secretary Sarah Huckabee Sanders called the Durbin-Graham bill “totally unacceptable to the president” and said it “should be declared dead on arrival.”

Rep. Jim Jordan, R-Ohio, a past chairman of the conservative House Freedom Caucus, said in an interview on “Fox News Sunday” that he believes Ryan may face legislative challenges because of the two-year, $300 billion budget dealpassed Friday by Congress.

“Do I think the speaker has problems? Yes, I do,” Jordan said. “Just a few years ago, he was viewed as the leader of fiscal responsibility in our party. And now he presides over a bill that increases spending $300 billion, a trillion-dollar deficit, when we were so poised to win this fight. Of course he’s got problems.”