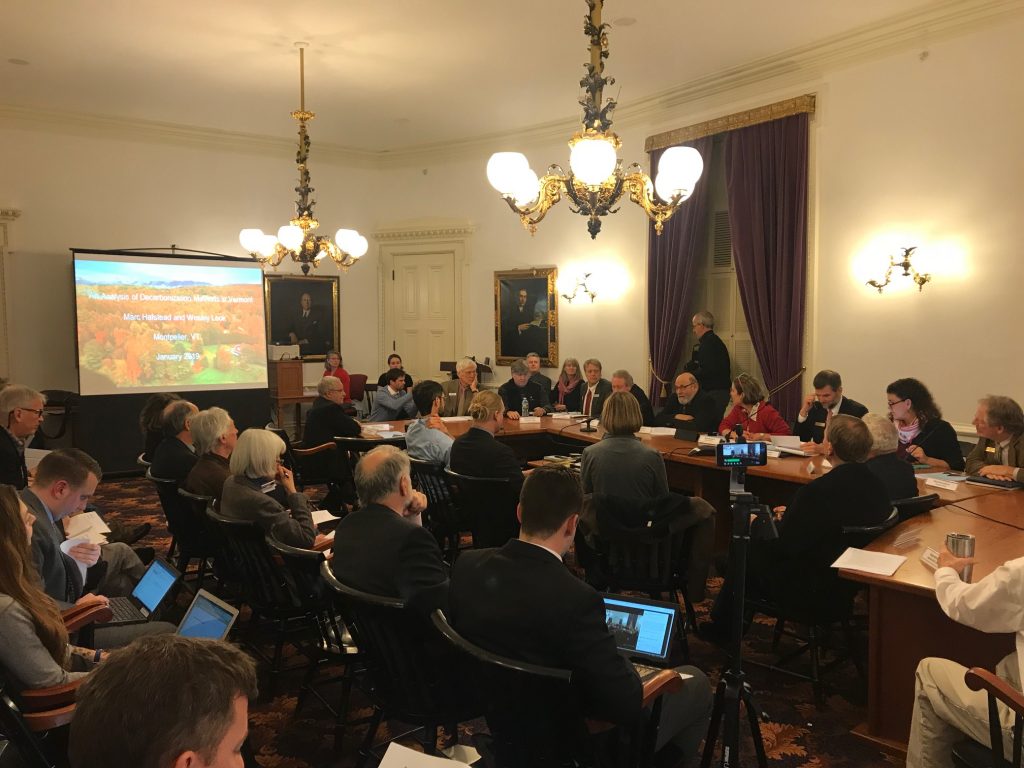 TAX OR MANDATES: Whether by carbon pricing or green energy mandates, the green agenda is to eliminate all carbon dioxide emissions from Vermont. A presentation to a joint meeting of the House Natural Resources, Fish, and Wildlife and the House Energy and Technology committees said the goal was attainable.

MONTPELIER — A much-anticipated report commissioned last year by the state of Vermont says putting a price on carbon could reduce CO2 emissions without hurting the economy or low-income residents.

When it comes to studies on carbon taxes and green energy mandates, there’s been a sharp contrast between what’s paid for by the state versus what comes from the private sector.

Such was the case Tuesday when Washington, D.C.-based Resources for the Future released its study on decarbonization methods in Vermont.

In contrast with other research showing that methods of reducing carbon are costly to businesses and taxpayers, RFF’s report concludes that carbon reduction initiatives will not only be gentle on the economy, but will result in a net economic benefit for the state.

Tuesday afternoon, study authors Marc Hafstead and Wesley Look presented their findings to a joint meeting of the House Natural Resources, Fish, and Wildlife and the House Energy and Technology committees.

The second group is the non-carbon pricing ideas. These include green energy mandates such as renewable energy portfolio standards, which require that electric utilities use increasing percentages of green energy over time. These can also be green energy incentives such as subsidies and rebates for electric cars and solar installations.

On the key findings page, the study acknowledges that even with using both non-pricing and pricing efforts in combination, it will be difficult to achieve 26 to 28 percent below 2005 carbon emission levels by 2025, which is the next big goal on the horizon.

“Vermont has a high share of emissions from transportation and heating fuel use; both sectors are difficult to decarbonize through carbon pricing or non-pricing policies,” the report states.

One recommendation is to use the revenue from carbon pricing to fund non-pricing initiatives like electric cars. However, by taking this approach, it becomes harder to make the tax revenue neutral.

“If we use a revenue-neutral policy, then you all will be looking for somewhere to pay for those [non-pricing] policies,” Look said.

All the number crunching by Resources for the Future seemed to indicate that a net economic benefit would result through rebates and improved environmental conditions, as well as by having healthier Vermonters.

“We project that the benefits per household will exceed the cost for every single policy we look at,” Hafstead said.

Hafstead said some of those environmental benefits were calculated using “social cost of carbon estimates.” At one point he was asked specifically about the impacts of carbon mitigation for Vermont.

“Obviously those impacts are global,” Hafstead said. “We were not able to do a kind of Vermont specific [analysis] and so we can’t say specifically what those benefits are for Vermont.”

These rosy predictions are not what other studies, such as those highlighted by the Ethan Allen Institute, have indicated.

One report by EAI’s policy analyst David Flemming applied the Essex Plan cost/rebate formula to six Vermonters, and it found in some cases households at around $20,000 income were still losing several hundred dollars even after collecting hefty rebates. Of the four carbon tax proposals analyzed by Resources for the Future, the Essex Plan was among the more mild proposals.

Rep. Timothy Briglin, D-Thetford and the chair of the House Energy Committee, asked about the policies’ impacts on Vermont’s most economically vulnerable.

“They are better off monetarily then they would have been otherwise,” he said. “We would say that this is reducing inequality, but what I haven’t shown you here, and isn’t in the report, is if you use the revenues to reduce, say, wage income [reduce income taxes], that doesn’t give as large of a benefit to low-income households and it could actually exasperate the inequality.”

Gov. Phil Scott ran in 2016 largely on an anti-carbon tax platform. However, his appointed climate action commission is on board with some non-pricing strategies, such as subsidizing electric vehicles.

Meanwhile, on social media, stakeholders are already making their opinions known. The fuel industry, in particular, isn’t thrilled with the authors’ conclusions.

Others tweeted that to meet current carbon reduction goals, Vermont is going to have to sacrifice because carbon pricing alone in the form of a carbon tax won’t be enough to help the state meet its CO2 reduction goals.