With 97 percent of the vote released in the Iowa Democratic caucuses, it appears Bernie Sanders and Pete Buttigieg each have grounds on which to claim a victory.

Buttigieg, the former mayor of South Bend, Indiana, currently stands at 26.2 percent of state delegate equivalents, which translates to 550 delegates. Sanders is close behind at 26.1 percent, or 547 delegates. Sanders, a U.S. senator from Vermont, leads the popular vote at 44,753, compared to 42,235 for Buttigieg.

Caucusgoers gathered Monday night at more than 1,700 precincts and formed “preference groups” for the candidates they supported. After the first alignment, supporters of candidates who did not have 15 percent support in a precinct were free to join another group for the final alignment head count. 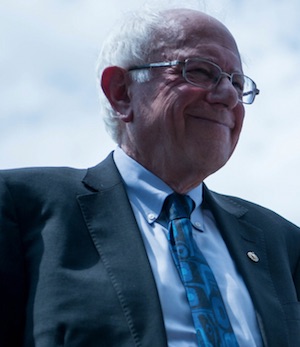 The final tally was used to determine the percentage of state delegate equivalents each candidate would receive to the state Democratic convention. This is the first time, however, the Iowa Democratic Party has released the popular vote totals from both the first and final alignments. So, for example, in 2016 when Hillary Clinton beat Bernie Sanders in Iowa 48.8 percent to 48.6 percent, those were the percentages of state delegate equivalents won. The popular vote totals were not released.

Sen. Elizabeth Warren of Massachusetts remains solidly in third place, with 18.2 percent, or 381 delegates. She has received 34,312 votes. Former Vice President Joe Biden is fourth, with 15.8 percent, or 331 delegates and 23,051 votes.

Minnesota Sen. Amy Klobuchar is the only other candidate in double figures with 12.2 percent, or 255 delegates, and 20,525 votes.

Monday night’s results were delayed due to a failure in the smartphone app precinct chairs were supposed to use to report information to the state party.

Campaigning in New Hampshire Wednesday, Biden called his fourth-place finish a “gut punch,” but also said “this isn’t the first time I’ve been knocked down.”

But Monday’s glitch wasn’t the only error by the IDP in reporting the numbers. Wednesday afternoon, just after it released 85 percent of the data, it posted a tweet stating “There will be a minor correction to the last batch of results and we will be pushing an update momentarily.”

According to the Des Moines Register, in one Des Moines precinct, votes that should have been credited to Sanders were instead listed under former Massachusetts Gov. Deval Patrick’s name, and businessman Andrew Yang was credited with some votes that actually belonged to Warren.

In addition, The New York Times found discrepancies in several precincts, including some that awarded more state delegate equivalents than they were allotted and others where the votes counted in the final alignment were more than in the first alignment, even though the rules state that no new voters can join after the first alignment.

Democratic National Committee Chairman Tom Perez went so far Thursday as to publicly call on the IDP to do a complete recount.

One thought on “Buttigieg, Sanders each try to stake claim as winner of Iowa Democratic caucuses”