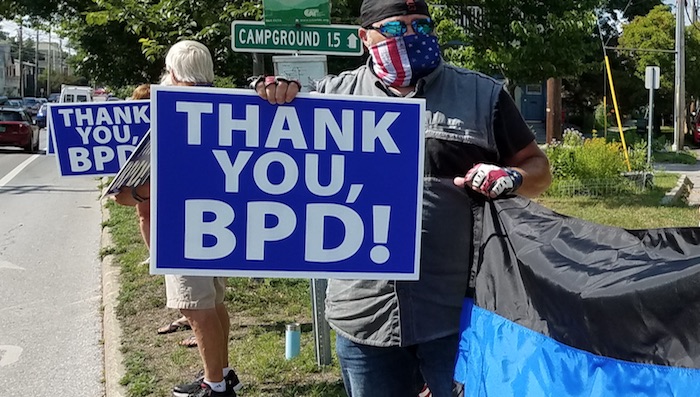 DOING MORE WITH LESS: Burlington Police Chief Jon Murad told the Police Commission Tuesday evening that the police department has to try to do more with less resources.

For one thing, Murad reiterated that shootings and car thefts have increased significantly compared to past years.

“We had a shooting at the Shelburn Road Shopping Plaza where Market 32 is on August 11,” Murad said. “We had a double shooting on August 13 in the very early morning hours. We had an officer-involved shooting, the Vermont State Police came to assist with bar closings and so that was a very, very busy weekend on top of a very busy and very stressful week for a lot of the individuals inside of the department.”

The chief continued to emphasize that serious crimes such as car thefts and shootings are rising in the city.

Data comparing the usual five-year averages with the 2022 crime stats show that gun fire incidents and stolen vehicles are each up by at least 500%. This data appears on the eighth page on the chief’s report.

Murad said there are more incidents where it’s highly suspected that people were shooting at each other, but it cannot always be proven and recorded as such.

“A case in point would be last night’s incident, we do believe that they were shooting at each other, but we don’t enough proof of that yet to know for sure,” he said.

No to 12-hour shifts, yes to more Community Service Officers

Murad made clear he has little enthusiasm for shifting to a 12-hour shift model for his officers.

“There would be an additional penalty to the hourly rate if we were to go to a 12-hour shift,” he said. “That is something therefor that we would have to put a lot of thought into doing before doing in, it would in inordinately expensive for the city.”

He also shared the latest on their utilization of CSOs (Community Service Officers) who are able to help with many non-violent crimes and help alleviate these shortages.

“We’ve had the six CSOs for quite some time now, they are managed by a Seargent who has responsibility for them as a group but on an individual day by day basis they are part of the deployment … Normally the officer in charge is a lieutenant, but on occasion the officers in charge are sergeants.”

The department had 92 officers on staff as the City Council voted to reduce its officer staff by a third back in June of 2020, now they are at 61 officers.

Help is coming, and more shootings

Some help is on the way. Murad said he’s got three new officers who will be at the police academy for the next 17 weeks and then they can join the much-depleted Burlington Police Force.

On Aug. 18, the same night that these new hires as well as officer promotions were being celebrated by the police and their families, more shootings put them back to work.

“Then that same night we had a shooting at the skate park, we had another gun fire incident last night. In the small hours we had a very significant assault on a police officer on Aug. 20 who got some significant eye injuries,” he said.

During the public comment section local resident and trained EMT Jacob Schumann shared that he identified himself to some officers during the arrest and pinning down of a suspect regarding an incident occurring on Aug. 14. Schumann said that he offered to observe and see if his services might be needed but the officers responded only by asking him to leave.

He thought that was a poor decision.

“Given that there was no medical oversight while somebody was being restrained which we know poses risks to physical safety and health wellbeing, I would ask that the department and commission consider when professionals identify themselves during the course of a situation and present their credentials, that they not be asked to leave because they are perceived as being critical of the force or what the force is doing,” Schumann said.

8 thoughts on “Burlington police chief reveals shootings, car thefts in 2022 are up five-fold”