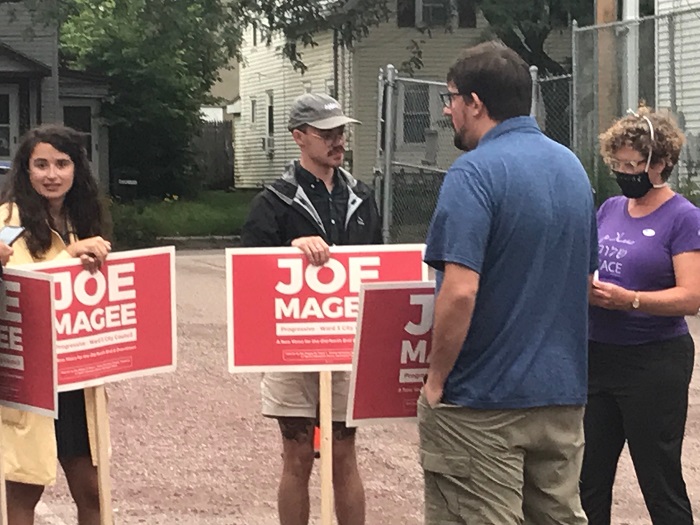 The Ward 3 seat has been in Progressive Party control for four decades, and will remain so for another term.

Magee, a former campaign staffer for Sen. Bernie Sanders, labels himself as “queer,” “socialist,” and “abolitionist” on his Twitter page. Among other things, the newest city council member calls for protecting residents against evictions, bringing back mask mandates, exposing capitalism, and abolishing the police.

Magee’s “abolish the police” tweet from April 23 did little to discourage Burlington residents from electing him instead of the pro-police candidate, Felker.

Magee retweeted that he wants Vermonters to wear masks to protect each other from the coronavirus, even as the virus continues to see few if any deaths for healthy and young people.

Remember how all the VT Dems & liberals were praising @GovPhilScott for his response to the pandemic then rushed to re-elect him?

Now would be a good time for you all to hold him accountable to set a clear path to keep Vermonters healthy & housed. Bring back the mask mandate!

Magee calls for making relief programs from the federal government permanent, even as the employment market continues to see a shortage of job-seekers.

Poverty is a policy failure. Instead of asking what might happen when pandemic aid programs end, we should be bold enough to make them permanent. https://t.co/qOB01jwNpJ

Milne had taken a a middle-ground on police policy. He said his plan was to merge social services with the police department so that at least for some non-violent scenarios, other professionals can address problems and allow armed officers to deal with only the most serious calls.

Felker told True North he will continue to speak out for conservative causes.

“No matter what, we’re going to keep moving forward and making sure that we proudly and unapologetically expose and represent conservative principals here in Burlington in a manner that is concise and polite,” he said.

Felker was the only candidate to explicitly support expanding the number of police officers to levels determined adequate for full-time, city-wide coverage.

Some voters told True North what issues mattered to them as they voted Tuesday.

“I think my biggest issue is wanting a candidate that is going to be the most independent, and independent-minded, and not beholden to a political party,” said Ward 3 resident Ben Luna. “I think a lot of the politics around here are controlled by either the Democrats or the Progressives, and I place a premium on independence.”

Rachel, who chose not to give her full name, thought Felker was a good candidate for city council.

“It seemed like he wanted to bring different opinions to the council … he also wanted to do stormwater infrastructure, and that was important to me,” she said.