By Robert Rector and Jamie Bryan Hall | The Daily Signal

House leadership has allegedly cut the 10-year costs of the bill in half. But these “savings” are almost entirely due to the gimmick of terminating or curtailing the bill’s enormous spending initiatives halfway through the 10-year budget window or sooner. 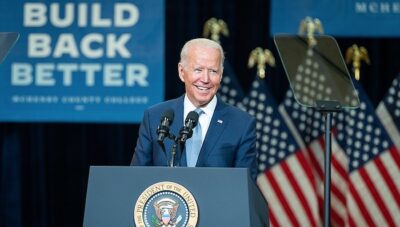 The Build Back Better Act would add another $11,300 in annual benefits to the average poor family, bringing total government support to $76,400 per family.

Have you ever seen the federal government pull the plug on a welfare program after five years?

New means-tested spending alone will cost over $800 billion in the first five years. If this new spending were fully funded through the entire 10-year budget window, the total cost would exceed $2.5 trillion.

This mountain of spending would be piled atop the current means-tested welfare system that already spends $1.16 trillion per year providing cash, food, housing, medical care, and social services to poor and low-income people.

In 2018, before the COVID-19 pandemic, the average family with children that was defined as poor by the government received $20,700 in cash, food, and housing benefits, and another $17,000 in medical care and $5,000 in social services.

Taxpayers also spent $22,500 on non-means-tested public education for the family’s children. Total government resources came to $65,200 per family per year.

How does the government determine that a family with $83,300 in annual resources is poor? It systematically ignores nearly all the benefits and resources the family actually has.

For starters, the government undercounts earnings in low-income families by a third. Then, government deliberately excludes nearly all of the current 89 means-tested welfare programs when calculating its official measures of poverty and inequality. Of the $65,200 in government benefits and support received by the average poor family, Washington counts only $3,125 as income in its official poverty measure.

Omitting almost the entire welfare state from the poverty measure creates the misperception that the U.S. has a meager welfare system. The Biden administration is capitalizing on this misperception to demand the largest expansion of means-tested welfare in U.S. history.

The Build Back Better Act would add another $11,300 in annual benefits to the average poor family, bringing total government support to $76,400 per family.

Ironically, not one penny of this new spending would be counted as income for the purposes of the government’s official poverty measure. Measured poverty would remain unchanged, or would worsen if work and marriage decline, as is likely.

The system is rigged. The taxpayer is trapped like a hamster in a running wheel. No matter how fast the hamster runs, he never gets anywhere. No matter how much the taxpayer spends on welfare, official poverty will remain unchanged.

Even worse are the harmful incentives built into the legislation. The bill raises the rewards for teen pregnancy and childbirth and increases the penalties for marriage. It overturns the foundations of the Clinton-era welfare reform, which required able-bodied recipients to work or prepare for work in exchange for cash benefits. Instead, the bill resurrects the long-failed policy of paying families not to work.

Taxpayers, society, and the poor would all suffer from the enactment of this legislation. Instead, policymakers should provide an accurate count of welfare spending and benefits received, maintain work requirements, and decrease, not enlarge, marriage penalties.

3 thoughts on “Build Back Better government supports would grow to $76,400 per poor family”