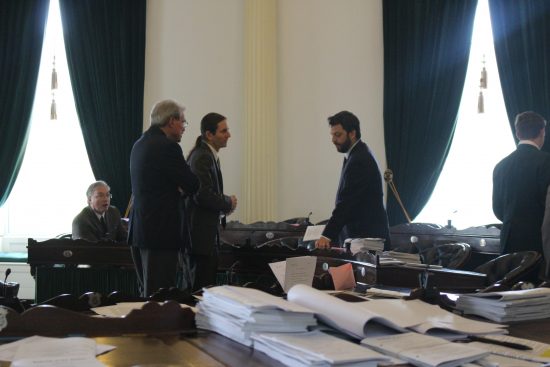 Before the gavels were struck in the chambers of the General Assembly Friday morning, optimism was lacking that a budget deal might be struck between House and Senate leadership and the governor’s office.

By mid-afternoon the Senate, on a partisan 20-9 vote, passed an amendment regarding teacher health insurance that requires school districts to find $13 million in savings for fiscal year 2018 by negotiating with the teachers union.

“It doesn’t meet some of the standards that I had put in place about trying to have some uniformity throughout Vermont, [or having] a mechanism in place to recapture the maximum amount of savings. … I think it puts a lot of pressure on school boards in terms of trying to accomplish the $13 million worth of savings,” Scott said in a news conference following the vote.

Among Scott’s criticisms of the plan was that it doesn’t require savings to continue beyond one year.

“It doesn’t put in place re-basing that would recapture these savings over years, and that’s what I’m really concerned about. … [I want to have] ongoing savings, not just this year, not just next year, but in years to come.

Scott’s goal is to achieve an ongoing annual savings of $26 million based on a change to teachers’ health care plans mandated by the Affordable Care Act. Starting Jan. 1, 2018, new less-expensive plans will come with significantly lower premiums, but they also will impose higher out-of-pocket costs through deductibles and co-payment requirements. The plans cost far less than what districts had budgeted for for fiscal year 2018.

Vermont Education Health Insurance estimates $26 million in annual savings after teachers shift to new health savings accounts by Jan. 1, which is the middle of the fiscal year — hence the $13 million.

In total, the VEHI calculates $75 million in annual savings from the new plans, but $49 million would go back to teachers to offset the plans’ higher out-of-pocket costs — including an 80/20 premium cost split between employers and teachers, plus $2,400 out-of-pocket cost for individual teachers.

While Democrats agree the savings are there, they strongly oppose Scott’s plan to negotiate teacher health insurance at the state level. Presently, health insurance is negotiated between individual school districts and the Vermont-National Education Association.

“They would have to take it through health care negotiations or they could choose to deficit spend, those are the two options,” Beck said.

Scott said a veto of the budget is likely if lawmakers can’t return next week to maximize the savings opportunity, hold teachers harmless and provide parity, and simplify negotiations for school boards.

“I’m hoping that we can get to a point where we don’t have to veto and come back, but if that’s the way it is that’s what we’ll do,” he said.

Sen. Carolyn Branagan, R-Georgia, said in all her years in the Legislature — seven years in all, including time as vice chair of the House Ways and Means Committee — she has never experienced a budget conflict of this magnitude. She said legislators apparently didn’t “think it was a serious proposal” when Scott first announced it earlier in the session.

Michael Bielawski is a reporter for True North Reports. Send him news tips at bielawski82@yahoo.com. Follow him on Twitter @TrueNorth82X.