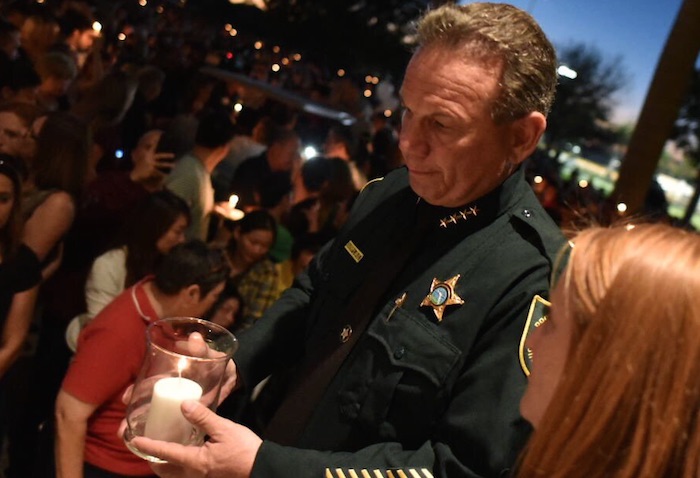 Records show that the sheriff’s department received 39 calls requesting service from authorities at Cruz’s family home since 2011, though it is not clear how many of the 39 calls were resolved on the phone or in person.

Israel faces heavy criticism for his department’s failure to act on red flags about Cruz before the school shooting. Seventy-four Florida lawmakers signed a letter calling on Florida Governor Rick Scott to remove Israel as sheriff, alleging that he and his deputies “ignored repeated warning signs about the violent, erratic, threatening, and antisocial behavior” from Cruz.

The sheriff’s department “had a total of 23 calls for service involving Nikolas Cruz or his family,” Israel said in a letter responding to Florida State Rep. Bill Hager’s call to remove Israel for “neglect of duty and incompetence.” “Since 2008, BSO responded to 23 incidents where previous contact was made with the killer or his family. STOP REPORTING 39; IT’S SIMPLY NOT TRUE,” the sheriff’s office said in another statement posted on Twitter.

But the department’s records show that there were indeed 39 calls for service from Cruz’s home address dating back to 2011, contradicting Israel’s claim.

CNN first reported that law enforcement “responded to Cruz’s house on 39 occasions over a seven-year period.”

“We absolutely don’t know how [CNN] came up with that number,” Keyla Concepción, senior public information officer for the Broward County Sheriff’s Department, told The Daily Caller News Foundation in an email.

An initial report from the sheriff’s office identified 23 incidents relating to the shooter or his family and explained deputies’ actions in each case. Of those, 18 involved Nikolas Cruz, three only involved his brother and two didn’t name either specifically. Some of the incidents on that list were not visits to the Cruz residence, but contact with Cruz outside his home or tips about his suspicious behavior. The sheriff’s office is investigating how it handled a tip on Nov. 30 that warned that Cruz was “collecting guns and knives” and that he “could be a school shooter in the making.”

There is not detailed information about all 39 calls beyond categories like “domestic disturbance,” “missing person” or “child/elderly abuse,” but 15 of the calls match with the sheriff’s more detailed list of 23 incidents.

Israel also said that deputies did not visit Cruz 39 times during a heated exchange with NRA spokeswoman Dana Loesch at CNN’s town hall with Stoneman Douglas students on Wednesday night. “To say there were 39 visits, I don’t know where you got those facts, but you’re completely wrong,” Israel said, adding that the media “reported it inaccurately.”

While there were 39 calls requesting authorities, it is not clear how many times deputies visited the Cruz residence. “All of these calls are being reviewed to determine if Mr. Cruz was involved and if deputies responded in person or via telephone,” Reva Ehmke, supervisor at the records/warrants division of the Broward County Sheriff’s office, told TheDCNF in an email. All but one of the calls includes a “dispatch date/time.”

CNN later reported that it obtained more than 30 detailed incident reports of misbehavior from Cruz and his brother. His mother called deputies to the house when a 14-year-old Cruz called her profane names and “threw a chair, dog bowl and a drinking glass across the room” after she took his Xbox privileges away. Three years later, she told deputies Cruz was “cutting his arms … to get attention.”

The sheriff’s office did not make clear why Israel said there were only 23 total calls for service relating to Cruz or his family when records show that there were 39 calls from the Cruz household.

The department faces other criticism for how it handled the active shooter situation. A deputy on duty at the school resigned after the revelation that he did not go into the school to stop the gunman. Another report alleges that four deputies waited outside the school while they thought the shooting was happening.

Israel stood by his actions leading up to the shooting. “I can only take responsibility for what I knew about … I have given amazing leadership to this agency,” Israel said on CNN’s “State Of The Union” on Sunday.

Scott ordered an investigation into law enforcement’s response to the shooting on Sunday.

One thought on “Fact Check: Did Broward Sheriff’s Department get 23 calls beforehand about school shooter?”